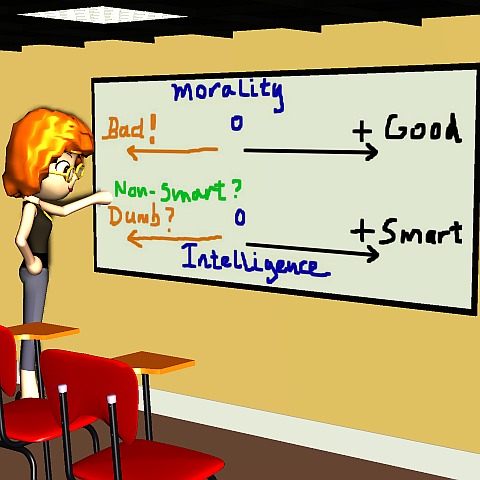 Professor Polistra has been puzzling over an inconsistency ... or maybe not.

Start from basics: Every human taste, tendency and talent is mainly innate, mainly genetic. Each tendency can be rated on a spectrum. With specific talents it's easy; there are aptitude tests for math or music or mapping. If your parents had high musical ability, you'll most likely have high musical ability, no matter who raised you.

Broader measures of intelligence are less definite, but still appear to be a one-way spectrum, with weak ability at one end and strong ability at the other.

The puzzle begins with morality, which seems to be a two-way spectrum. Some people are natural saints: regardless of life experience or training, they know the right and good action, and will try to do the right and good thing in any circumstance. The opposite end is not simply weak goodness. The opposite end, as typified recently by Joseph Duncan, is strong badness. Duncan is a natural devil, needing to do harm in the same automatic and constant way that most of us need to breathe. Regardless of experience or training, he knows the evil choice in every circumstance, and will perform the evil action unless forcibly prevented.

The weak part of the spectrum is the large middle area; most people have a mixed desire to do both good and bad, and can be trained to do more of the good or more of the bad, depending on upbringing and circumstances.

Morality thus appears to be unique in its two-sided-ness. Or is it? Are other scales, like learning and intelligence, also two-ended? Prof P thinks the current behavior of our ruling class may support this conclusion. Consider the Texas prosecutors who are grinding relentlessly ahead with their official Kristallnacht against the polygamist cult. Obviously these folks are quick-witted; you don't get through law school without an ability to absorb facts. Yet they appear to have drawn a precisely reversed conclusion from everything in the law books and everything in recent experience. The rules of evidence, presumably part of their law courses, have led them to use a blatantly false anonymous phone call from a person who was unquestionably nowhere near the cult. Recent experiences, from McMartin to Wenatchee to Edenton to Duke, should tell a prosecutor that it's really not a good idea to carry through a case based on insane or nonsensical accusations.

Or consider the Bush foreign policy. We have steaming piles of evidence for failure and success in war and diplomacy. Wilson fails, Roosevelt succeeds. A weakly smart intelligence would try to do Roosevelt and miss some of the steps, or wouldn't know how to adapt the steps to new circumstances. It takes a strongly stupid intelligence to pick the Wilson method every time.

These single examples may not prove anything general, but they are still large examples, involving large numbers of people. Each of these authorities has assistants and advisers who must be equally counter-intelligent; otherwise they would be giving positive-intelligent advice and quitting in protest when the advice isn't received.

Edit after re-reading: The last paragraph about assistants and advisers is sardonic. I do realize that pure crass careerism causes the sycophancy of advisers. I'm sure most of the subordinates are less strongly stupid than the top man in these cases, but they put ambition above intelligence.
The rest of the text is serious if speculative.  ¶ 9:54 AM