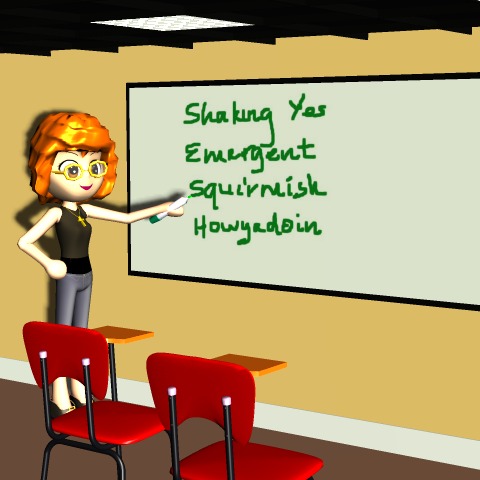 Since Polistra was vacationing in a better time around Christmas, she missed the annual Language Awards, given for the most repetitive or meaningless new words or phrases. There have been a couple of sudden new entrants in the last month or two, so this seems like a good time to run the ceremony.

"Shaking your head yes" ... instead of the much shorter "nodding".
This makes some sense. You can expect that language will evolve toward parallelism; when two usages seem to be closely related they will converge toward similar forms. Normally the Yes gesture is described by nodding while the No gesture is described by shaking your head No. The force of regularity will try to make both phrases sound similar, and natural laziness would typically push toward the shorter form. In this case there isn't a single verb available for the No action - Shaking by itself won't do the job - so the irresistible impulse toward regularity had to fit the longer phrase to both actions.

Emergent.
Seems to have started in medical circles as a substitute for urgent, though I can't see any difference or advantage. Now spreading to other areas of discourse.

The planet.
You could always spot a Commie by his constant references to the entire world; it's a natural part of leftist thinking to assume all humans are identical, and to apply the same arbitrary rules to all humans. In the '50s, World was the shibboleth. You could safely assume that an organization with World and League in its name was a Soviet front. Now that the prophet of Communism has shifted from Marx to Maurice Strong, his pet word planet is the shibboleth.

It is what it is.
Often used as a way of avoiding forbidden statements in the realm of racial and gender differences.

I nor my associates. (Instead of 'Neither I nor my associates')
Nor without neither has always been possible, but tended to occur only in poetry, where the omission was needed for the meter. I'm not sure why it's spreading now, but it certainly is!

Part of who I am.
Seems to be used often in commercials, as in "Good health is a part of who I am." Well, yes. If you lose health and die, then there ain't gonna be no I at all, let alone any parts of I, or parts of who I am. The phrase simply has no meaning. If you do something often, or enjoy doing something, then it's probably part of your genes and can be discussed separately. Your ontological essence (who I am), if such a thing can even be defined, doesn't have sections or parts. If it did have parts, you could subdivide it and sell shares in your soul. Let's try to apply this to the obvious target audience of the commercial. If she asks "What are the parts of who I am?" she would answer: "I'm a grandmother and a college graduate and a harpist and a cat owner and a Good Health."

Squirmish instead of squeamish.
A sudden, and rapidly contagious, new development in March of 08.

Ancestor instead of descendant.
An easy mistake, and I'll confess to making it myself.

Predecessor instead of successor.
Another easy and spreading error.

Viruses with prefixes
In the last few years, viruses have suddenly become prefixed forms. Hanta Virus became Hantavirus, Norwalk Virus became Norovirus. This happened without any explanation that I've heard. I can't find anything via Google to distinguish between the types of virus that go prefixual versus the kind that retain their original first name and surname, if there is a difference. Will the common cold virus become Cocovirus? ---- Oops, it has already become Rhinovirus.

Optics.
This has popped up in the last two months, meaning the "visual impression" or "visible front" of an event or a politician. Suspect it will be a passing fad; doesn't have a good reason for existence.  ¶ 6:49 AM