Wednesday, March 26, 2008
Just what we need, Comrade McGreen. Via Derbyshire at NRO:

McCain said the United States’ goal in fighting Islamic extremists should be “to win the hearts and minds of the vast majority of moderate Muslims who do not want their future controlled by a minority of violent extremists.

“In this struggle, scholarships will be far more important than smart bombs.”

Yes, that's just exactly what we need to do. Create more Arabs like Sayyid Qutb, the grandfather of al-Qaeda, who acquired his hatred of the West when he studied at Colorado State in Greeley back in 1947. He was appalled at the "immodesty" of American boys and girls.

And remember, American college girls looked like this in 1947: 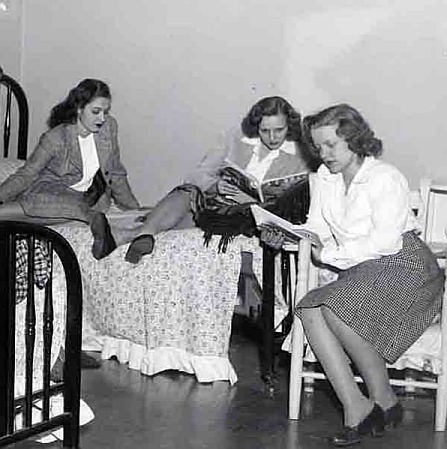 Shocking! Shocking! I can see an ankle!

Later: Polistra beat Mark Steyn to the punch on this point!! This has never happened before. Wonder if the cognitive dissonance of pretending to support Comrade McCain, the appointed and anointed brand-R candidate, is wearing down the minds of the beltway conservatives?  ¶ 3:56 PM