Tuesday, February 09, 2021
Surprised myself Listening to a Mozart sonata, still thinking about Italian and programming... The Gender Polizei should ban Mozart and Bach and other baroque composers. Baroque music is like the male approach to a task, including sex. Baroque is COBOL. Imperative verbs. Romantic music (Wagner, Debussy) is non-programmatic. Stories and movies for women are the same. Lots of slow foreplay, passive and subjunctive syntax, never really decisively starting or ending. Long establishing shots, lots of inconclusive gabbing, a little implied action, more gabbing, fadeout. If the Polizei wanted to get serious, they'd also ban all digital programming and require a return to analog computers. Surprising myself: And on that front they'd be RIGHT. = = = = = Unfortunately they're not going to force that change, because the Gender Polizei don't know history and can't allow anyone to appreciate the REAL differences between men and women. The Gender SS only know superstars. Two women have become arbitrarily famous in digital software, none at all in analog computers. (Hopper richly deserves the fame, Lovelace doesn't. Lovelace was just writing a description of Babbage's device, not inventing anything.) Analog computers, especially fluidic, are much closer to the things that women actually do better. Smooth processes with multi-layered continuous feedback. Note the only available picture of Lukyanov's computer in action: 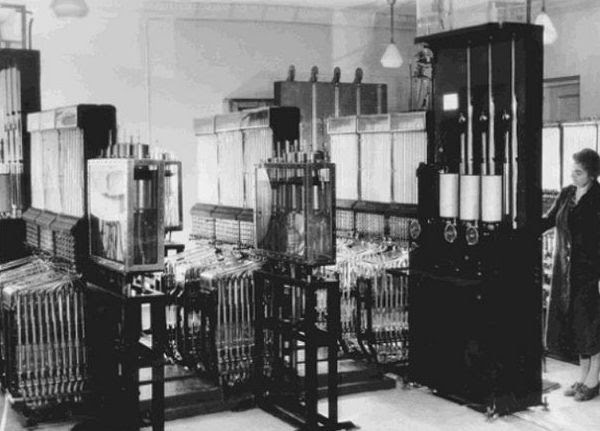 The Soviets did a better job of employing everyone appropriately. Why the mismatch? For one thing, analog computers never became famous at all, so their programmers, whether male or female, are forever anonymous. Analog machines were used extensively in military applications and in the more prosaic side of engineering. They weren't used in places familiar to TV and movie producers. Digital computers were visible in newspaper offices and TV studios, so new developments on that side of computing seemed familiar to media types.