Tuesday, February 09, 2021
More Italian electronics Continuing to look at the Italian electronics mags newly added to American Radio Library. An article on Commodore Basic from 1980 leads to a closer examination of language choice. I had thought about the subject before and dismissed it quickly. English has no diacritics and very simple inflections, so it was obviously better for early computing. If you need to distinguish between ä and a, or if the noun forms must agree in gender and number with the adjectives, an early computer couldn't handle it. Looking at the Italian, I can see that the advantage wasn't really so obvious. 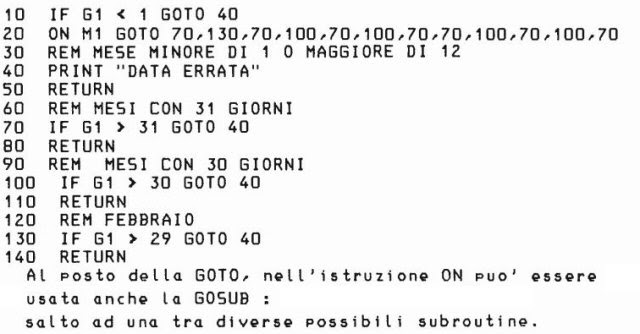 Italian does use acute and grave accents, but they don't really matter. Leaving them out doesn't cause any ambiguity. Umlauts in German are much more phonemic, and would have been more of a dealbreaker. But the substitutions ue for ü, ae for ä, and oe for ö are common even in handwritten German, and would be instantly understandable. More importantly, the keywords in computer language are confined to imperative verbs, singular nouns, and prepositions. In all the Western Euro languages, those words are unvarying. A singular or informal imperative is always the shortest form of a verb, and a singular noun is always the 'standard' form. Agglutinative languages like Hungarian and Turkish would fail on prepositions, because most prepositions are firmly glued to the end of the noun and change their vowels in harmony with the main vowel of the noun. So there wasn't a good reason to have keywords always in English. The major Euro languages could have established their own versions, which would have helped to maintain local computer industries and local software creators. Another point of interest: DATA ERRATA. Italian is closer to Latin, so DATA was treated as fully Latin, requiring a Latin adjective form. English grammarhoids try to have it both ways, treating data as a plural without really using it in Latin. Aside from language, I see that Commodore Basic had a multi-choice ON statement, akin to SWITCH in C. I'm pretty sure this wasn't available in IBM/MS Basic. Nice feature. Makes me wish I'd paid more attention to Commodore.