Sunday, February 28, 2021
Four layers of defiance Ran across a fairly typical math answer to a non-math question on Quora. The question is about structures defying gravity, like the Tower of Pisa. The math answer is the Law of Centers, which is valid TO SOME EXTENT, but only under ideal circumstances. In reality there are two distinct ways to defy gravity. Nature uses both, and human structures use both. The Pisa kind is risky and fragile. The other kind is somewhat less risky. Perceptually, anything above the ground without direct support immediately under it defies gravity. The Pisa way, as seen in Nature: 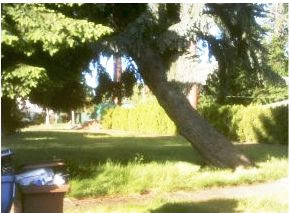 A tree that grew naturally at a 45 degree angle, with root structure designed to take the stress. The roots extend out to directly under the center of gravity. Towers like Pisa do the same thing. If you look closely enough, every living thing defies gravity in the non-Pisa way, sometimes called dynamic stability. 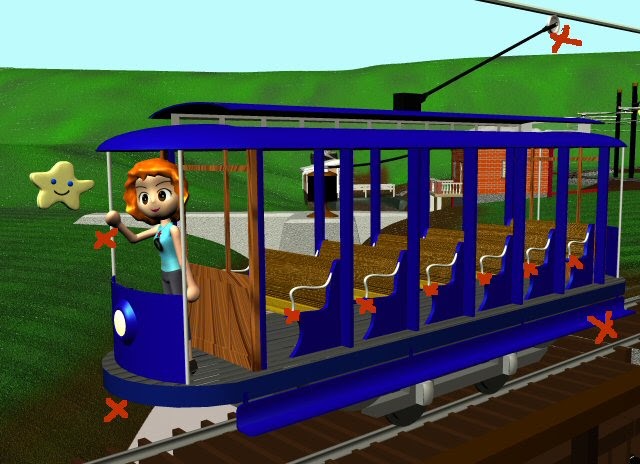 Happystar is showing the simplest natural defiance, flying. Totally unsupported by a vertical structure under him. I've placed Xs on several of the non-Pisa defiances. These are basically cantilevers, extensions of a vertically supported structure that can go beyond the roots because they don't affect the center of gravity. On the streetcar the cantilevered ends are balanced, but the balance (passenger placement) needs to be actively maintained by the conductor. Polistra's waving hand is actively balanced by her internal feedback system. Polistra is also leaning forward in a Pisa way, even though her toes are NOT extending out under her head. Again the complex system of reflexes and acquired skills adjusts the center of gravity constantly to keep her upright on a moving vehicle. The rigid Pisa defiance is far more risky. A wind gust can break the root or foundation structure easily. = = = = = I've got trees on the mind right now because the neighbors to the west are FINALLY cutting down a row of six wood weapons that have been threatening both their house and mine for many years. In last month's windstorm the middle tree came down at just the right lucky angle to miss their house, their garage, the power lines, and my house. The topmost branch broke off and brushed against my house, making a terrible noise, but didn't do any real damage. When the tree went down, its balancing root structure pried up part of the fence near it. If the roots had extended a few more feet, they would have pried up the house to the north. Just lucky enough again. I'm happy and relieved to have all of those killers down. Four layers of luck is WAY too much to count on. (Or, returning to overterse math answer form, conjunctive probabilities multiply.) Well poop. They DIDN'T cut down all the trees, just "thinned the herd". Originally there were 7. The middle one fell, and the cutters took down only two, so the nearest one to me is still a threat.   ¶ 9:50 AM