Wednesday, July 29, 2020
Reviewing reality vs fog Just trying to pin down reality versus guesses at this point. The best measure of reality is this long-term graph from Sweden, a rich modern country with excellent records, and the only 'Western' country that DIDN'T follow the evil game. 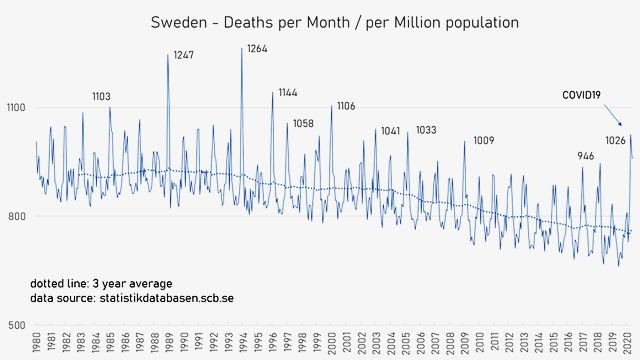 40 years of seasonal death patterns. Roughly every fourth winter is worse than the rest. This season was among those every-fours, but not the worst. Five of the bad years were worse than this one. Without all the craziness and evil, this was just a relatively bad season, and it would have been handled like the other bad seasons, quietly and smoothly, with some hectic moments in some hospitals, but without any public panic or special requirements. Hospitals are prepared for those hectic moments. US hospitals were also prepared, and were turning on their well-honed mechanisms when the craziness interrupted everything. That's the reality. = = = = = One thing is clear and unambiguous, before any guessing about motives: All of the shit we've been doing (lockdown, distancing, masks) is precisely CONTRARY to all normal public health rules, and perfectly calculated and intended and designed to DEFEAT AND DESTROY HUMAN IMMUNITY. Beyond that it's foggy and muddy and ambiguous. We still have no idea who started the evil or why. At first the evil decision appeared to be a total universal crime, ordered by one mastermind, backed by threats and blackmail. It appeared that all countries were acting under one leader. This is clearly wrong, as most of Europe has stopped making the mistake, and a few US states have stopped or never started. The stopped countries and never-started countries haven't been punished. In fact the stopped and unstarted places are being RICHLY REWARDED BY REALITY. Their businesses are running, their hospitals are running, their governments are receiving taxes instead of paying unemployment, the virus is fading out as viruses always do, and their people are healthier and happier. This difference will last for generations. If there was a threat, it was empty. We know from Lukashenko that the evil was encouraged by bribes, which should be easier to track and detect than blackmail. At this point the governors and presidents who continue making the lethal mistake are acting on their own, for a variety of reasons. For Inslee and some others, the reason is innate psychopathic evil. Inslee's tendencies were already clear before this year. He enjoys doing harm. For most governors and mayors, it's just standard bureaucratic fear and inertia. They don't understand viruses and immunity, and they don't understand how to spot scientific frauds. They do understand liability and lawsuits. So they do what the Public Death Officers tell them to do. Following orders is less visible and suable than disobeying orders. = = = = = Another argument against the total universal conspiracy is that dissent isn't being seriously censored. The MSM are doing what they always do, carrying only the side that creates maximum war and suffering and death. That's the permanent job of the press, true for 200 years. But outside the MSM, truth is holding its own. Some media on the 'skeptical' side are overblowing the role of demonetizing and occasional censorship. This is fake outrage. Skeptics in earlier eras never expected to be PAID for using Deepstate's presses and broadcast studios. Today's dissidents have VASTLY more outlets than ever before, with no obvious punishment or censorship. Some of those 'overblowers' may be false flags working for Deepstate to cause more self-censorship and anxiety.