Tuesday, April 23, 2019
Turns out Georg was right! Via ScienceDaily, researchers at Zurich have made a resonant circuit with oscillating HEAT instead of oscillating electron flow. As with electric LC circuits, and as with mechanical resonators, this resonator continues oscillating for a while after the driving force is turned off. During the oscillation, heat flows alternately from a warmer object to a colder object, and then from the colder to the warmer. The latter half of the cycle 'technically' violates thermodynamics, but not really. Electronic and mechanical and fluidic resonant circuits can (and usually do!) move against the potential gradient for half of the cycle, so it shouldn't be strange that a heat resonator does the same. Simple example: The guitar string is "spontaneously" moving uphill against gravity for half of each cycle. We understand that this doesn't violate the laws of gravity, so we should think of heat flow the same way.

The finding that heat can oscillate is the strange and interesting thing! = = = = = So it turns out that Georg Ohm's original analogy of electricity and heat was right after all. = = = = = START REPRINT: Polistra is always cheering for traditional and human-scale measurements. She wanted to find out: Was there ever a set of natural measurements for electricity? Was there ever an English unit of potential or an American unit of resistance? Or did the original experimenters jam everything into the metric prison from the start? The answer: Well, sort of. Briefly. In the early days of telegraphy, resistance was often measured in terms of length and width of a standard wire, and different nations had different standards. But this didn't last long, and the volt, ampere and ohm were quickly adopted as universal. Polistra admits reluctantly that this situation makes sense. Food, farmland and fabric were used and measured systematically for thousands of years before theoreticians came along. Electricity was first used and measured by theoreticians and later passed into common use. While looking for the nonexistent tradition, an interesting forgotten story popped out. Back in 1827, Georg Ohm developed the math of circuits correctly by using an incorrect analogy. Other 'electricians' had already reached a correct understanding of positive and negative charges; Ohm ignored this understanding and used the transmission of heat instead. Because of his incorrect analogy, his correct math was not accepted by the other scientists for many years. Alfred Mayer, writing in 1890, said:

Ohm was led to the conception of this law by assuming that the flow of electricity in a voltaic circuit is similar to the flow of heat by conduction in a rod. Also, his assumptions that the actions of two electrified particles are directly as their distance, and that the electricity is uniformly dense over each cross section of a conducting wire, were directly opposed to the laws and facts well established by Coulomb for statical electricity.

Damned theoreticians. Always the same. Always ignoring truth if it doesn't fit the latest theory. Ohm assumed that charge was handed off step by step between the 'particles' in the wire, just as the molecular agitation of heat is handed off from one molecule to another. This led him to view resistance as a sort of velocity measurement:

That is to say, both elements reciprocally change their electric state as long as a difference continues to exist between their electroscopic forces; but this change ceases as soon as they have both attained the same electroscopic force. ... The motion is effected in most bodies so rapidly that we are seldom able to determine its changes at the various places, and on that account we are not in a condition to discover by observation the law according to which they act.

If he was observing any delay using the instruments then available, he was probably seeing the result of inductive reactance in a long coil or wire, rather than simple resistance. A low-pass RL filter can easily take a perceptible amount of time to reach full flow. Why did Ohm's bad assumption work? Probably because it wasn't all that bad! I spent much of my life playing and working with electrical stuff: repairing, designing, building, teaching. I used Ohm and his variants and corollaries daily. I always started with the analogy of airflow or waterflow**, in which the electrons pass between the atoms of the metal at a finite speed, while the charge field acts instantly across space. In the end it doesn't matter which of these concepts is treated as a finite velocity. Polistra and Happystar try to see Ohm's original view, using a couple of experiments. 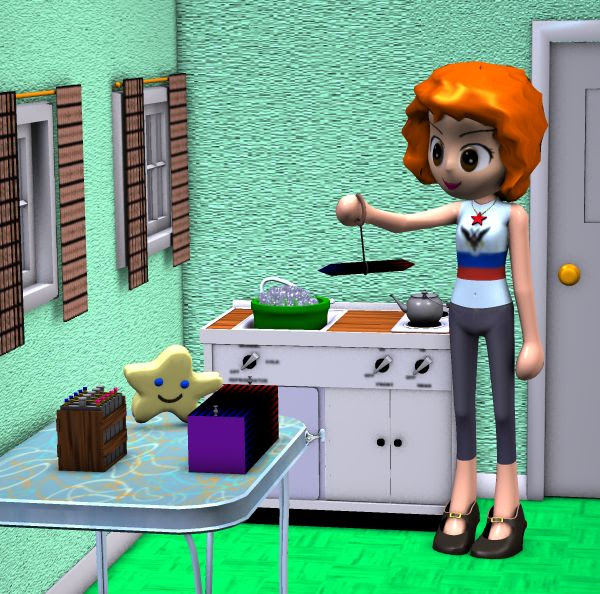 First Polistra shows heat conduction in a rod. She puts the rod onto a 'potential difference' between cold and hot, and watches the different molecular agitations transfer at a finite speed, until the rod is at a uniform temperature.

Now Happystar applies the same concept to a (non-factual!) electric circuit, perhaps as Ohm imagined it. Using an Edison iron-nickel battery to create a potential difference, he drops a wire onto the negative end to complete the circuit. The charges transfer at a finite speed toward the center of the resistive load, until the load is at a uniform current.