Wednesday, September 26, 2018
Three-way stop Headline on research from Cardiff: Mathematicians calculate the safest way home Subhead indicates it's an app to improve pedestrian safety. Wow! That's for me! I've always been a walker, and for the last 25 years I've lived without a car. Anything that keeps me out of bad neighborhoods and prevents me from being squashed by SUVs is a good idea! Wow! Reading the article: SHIT. This is wrong in every possible way. Wrong #1: They aren't talking about bad neighborhoods because "scientists" aren't allowed to discuss bad neighborhoods. The idea of bad neighborhoods is a NO-GO ZONE for a "science" "brain", especially in Britain. Wrong #2:

The computer algorithm takes into account a number of factors, such as the types and number of crossings, the type of street, the possibility of jaywalking and the speed limits of each road in a given area. The scoring is done automatically by simply feeding in the raw data from a map of any given area, and has been tested on 15 cities in the UK

This doesn't catch the important factors for pedestrian safety. A busy intersection can be relatively safe if both streets are one-way, or if there's a good standable median. When you only have to watch one direction at a time, you can predict car behavior. An unbusy four-way stop is the most dangerous situation because cars are jumpy and opportunistic. An asshole in a hurry will roar through the stop at 60. Every intersection has its own personality. The map won't tell you these things. Only direct experience can tell you. Wrong #3: It's a fucking app! If you're paying attention to your cellular thingamajig you AREN'T paying attention to the world. This goes for bad neighborhoods as well as cars. Safety starts with FULL ATTENTION. I'm 100% certain that none of these "scientists" are walkers. If they had the EXPERIENCE of walking, they wouldn't have started this absurdity. EXPERIENCE SURVIVES, THEORY KILLS. = = = = = Expanding on the theme of ATTENTION, triggered by this typical Tesla cultist quoted in one of the Tesla anticult sites:

Just bought a new @Tesla ! Love the car but within 24 hours I reversed into a car parking post which the car sensors did not pick up and now I have to wait over a month to repair with an authorised Tesla body shop !! Come on @elonmusk you need to sort out your customer service !

Two cadenzas: 1. Kudos to the Tesla anti-cultists, who are doing a beautiful job. Compare this to the similar Hubbard cult, which had only ONE obscure anti-cultist for many years. That would be, of course, Alphia Hart in Enid. 2. "A parking post which the car sensors did not pick up." This clearly reflects the same ANTI-ATTENTION mode of thinking as the above researchers. You're not supposed to LOOK and LISTEN via your OWN SENSORS. You're only allowed to trust the sensors provided by Apple or Tesla, monitored and controlled by NSA. Your own eyes, connected unhackably and unmonitorably to your own cerebellum, must be disconnected. 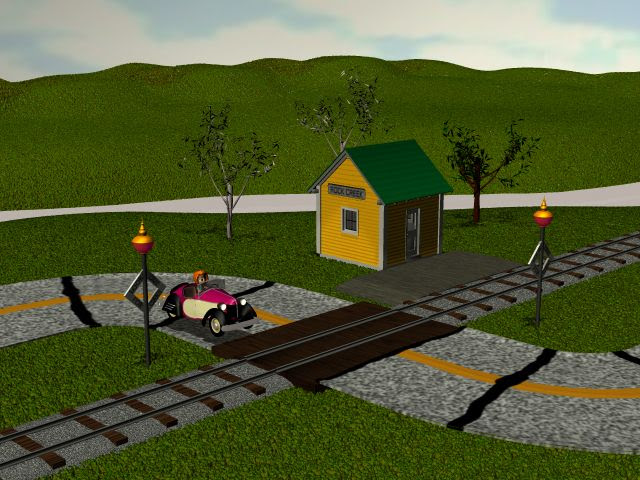 Back in the pre-NSA days, Polistra was using her own eyes to detect the presence or absence of a hazard, with some added assistance from the MECHANICAL sensor driving the light and bell in the warning sign. The warning sign was NOT controlling the Bantam's brakes and steering. Her own hands and feet were controlling the Bantam's brakes and steering. She was NOT letting her Bantam judge the presence of a train via its Wi-Fi connection to Elon's branch of NSA.