Friday, March 16, 2018
"Rights" vs Duties, origins edition Returning to Gouvernour Morris vs Tom Paine, trying to sort out the apparent inconsistency in the Hix radio show. I managed to wade through more of the 1838 biography of Morris, and now I have a fairly good sense of what happened. The real story is a perfect fable of "rights" vs duties, at the EXACT START of the conflict, featuring a perfect avatar for each side. First the broad background: Morris was born into a wealthy and influential family, one of the founding families of the English colonies. He had a unique talent for math and engineering, and his family trained him for diplomatic work. He HATED revolutions because he knew the historical record. Revolutions ALWAYS bring tyranny and ruin. He used his influence to slow down the American revolution. When slowing failed, he got into a position of power where he could attempt to moderate the excesses. When he saw the French revolution coming, he was working as a trade representative for the new USA STRONG dysgovernment, using his math talents to deal with currencies and debts. At the moment when Paris fell to Robespierre, Morris was in France trying to negotiate repayment of our debt to the old French royal government, which had helped finance our revolution to weaken England. [Remember: England and France were at war almost constantly since the time of Jesus.] = = = = = What was Paine doing several years BEFORE the French revolution? 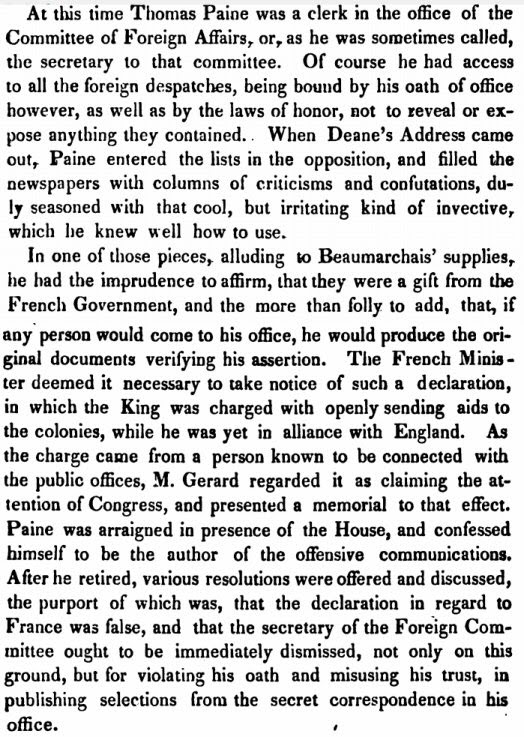 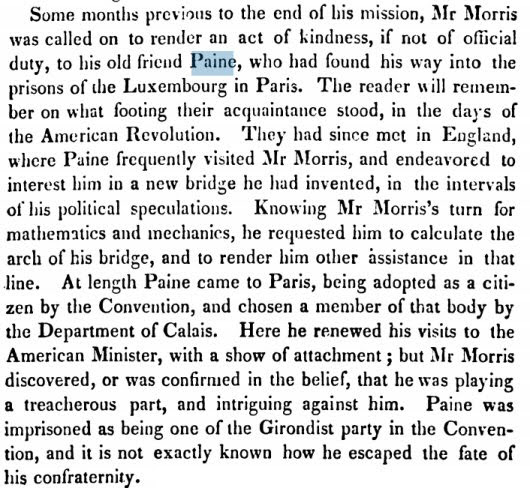 He was imprisoned for being part of a losing branch of the revolution. What part did Morris play? 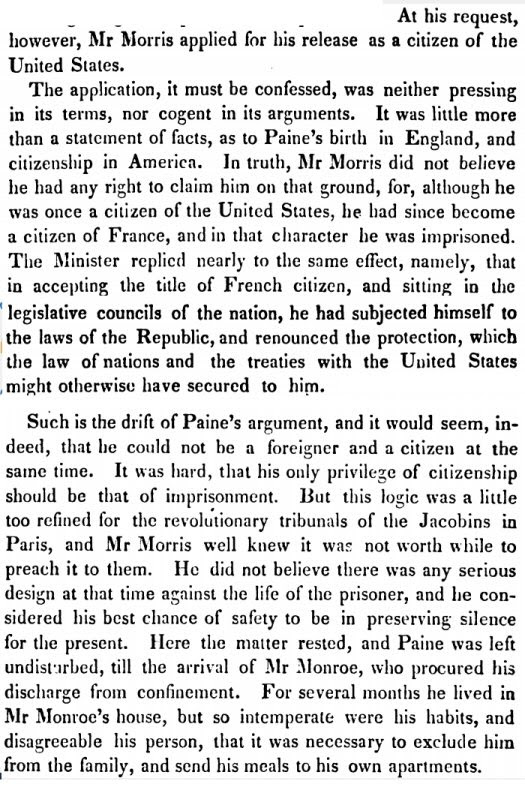 He tried to get Paine released, but without much sympathy because Paine had already betrayed America, joined Robespierre, and switched citizenship. Why should Morris defend Paine from the country he had chosen? Later, James Monroe was sent to Paris on a different mission. At that time the French were happy to get rid of Paine, who was an all-around troublemaker. = = = = = Paine was the classic Chaotizer. His sole purpose in life was to create chaos and death, and he developed the murderous delusional concept of "rights" to assist in his genocide. Helped to start one revolution, got position in the revolution, got dissatisfied, used his position to help start another revolution. When he was caught, he went to France, got position in the new revolution. This time the rebels realized that he wasn't worth defending. Morris was the classic Order-maker. He had a strong sense of DUTY balancing his aristocratic privileges. His DUTY was to preserve and create order. He tried to halt one revolution. When it happened anyway, he got position in the revolution, tried to bring order to the new setup. = = = = = Are there any modern equivalents? Paine is easy. Ira Einhorn. Precise match. Used his influence to create disorder in NYC, moved to Paris, continued to ruin everything. Finally even the French got tired of him and threw him back. Remembered fondly by fuckheads as a defender of "environmental rights". Morris was harder, because I had to fight my own biases to reach a surprising conclusion. Closest equivalent is Bill Gates. Born with wealth and math talent, used his influence and talent to gain more wealth, now uses his wealth to bring order to parts of the world that are prone to chaos and revolution. Gates is the best warrior against Soros. Clean water and vaccines help ordinary people to make more life and more order and more value. (The biography emphasizes Morris's ability to recognize his own biases without losing his own biases. So I'm trying feebly to emulate him.) = = = = = Finally, back to the original question. Was Hix right or wrong? Sort of technically correct but essentially wrong. His source got the basic facts of Paine's imprisonment but ignored the background and the previous events, thus missing the REASON for Paine's imprisonment and the REASON for Morris's lack of enthusiasm. Without the background, Morris appears to be the betrayer. Hix's other Morris story was about Robert lending his fortune to the USA STRONG dysgovernment which never repaid him. In that case the radio story accurately portrayed the Morris family's unique virtue.

Labels: From rights to duties