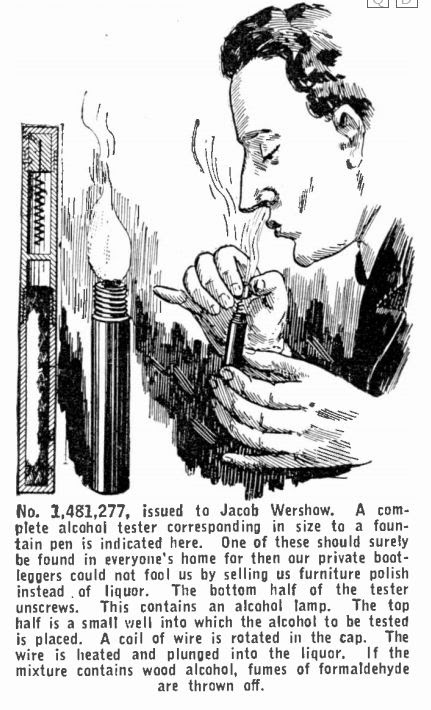 A complete alcohol tester corresponding in size to a fountain pen. One of these should surely be found in everyone's home, for then our private bootleggers could not fool us by selling us furniture polish instead of alcohol. In 1924 alcohol prohibition was just four years old, and already the culture of bootlegging and evading was well established. Note that the magazine was not censored or demonetized for helping people evade an unpopular and stupid law. Note also that the device was PATENTED. Compare with the modern Feds. Even after most of the states have decriminalized pot, the Feds are still raiding producers and sellers, and still refusing to deal with cash transactions that are perfectly legal in the states where pot is legal. Banks and insurers can't knowingly handle such transactions. The Feds have always WANTED to obliterate the country but in the '20s they weren't TRYING very hard. Wilson's tyrannical agencies faded during the '20s. How do we get back to a low-energy tyranny that doesn't give a fuck? How do we resume a corrupt government that can be affordably bribed? How do we get rid of an all-consuming all-caring ABSOLUTE PURITY? = = = = = Later: A websearch shows that the Patent Office has NOT turned tyrannical. Patents relating to pot have been issued regularly since 1942, which happens to be four years after the Federal prohibition on pot. So I'm wrong about this part of the problem.