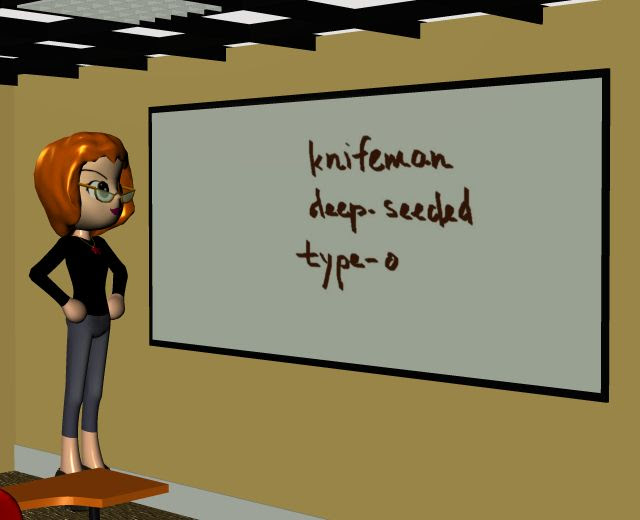 = = = = = Segwayed: All of this segwayed into the meeting with the leasing agent afterwards. This makes more sense both orthographically and semantically than segued. Segue comes from Italian, originally meaning it follows or here's what happens next. This is the only instance in English where gue is pronounced /gwe/. All other instances come from French, where it's typically at the end of a word and pronounced /g/. A single exception typically disappears. We use segue to mean a shift or transfer of action, so a vehicle is an appropriate image. = = = = = Knifeman: Gunman is used all the time in news. Swordsman is still an active word, though mainly restricted to sporting contexts. Why don't we use knifeman? Brits have started using it. Two separate stories from British media: BBC: Kenya Deputy President Ruto's home entered by knifeman Express: Astonishing moment heroic passersby CONFRONT Hamburg knifeman on terror rampage = = = = = Deep-seeded: Wonderful bonapropism from a sharp article by Eric Sammons. Institutional bias is another reason questions regarding Vatican II itself are censored. The Church and its supporting institutions have heavily invested themselves on the idea that Vatican II was beneficial to the Church. We are a “Vatican II Church.” To question that is to put a deep-seeded worldview in peril. Deep-seeded makes VASTLY more sense than deep-seated. Web search shows that this isn't a fresh coinage, it's an active change. Deep-seeded is quickly replacing deep-seated. Grammarians are defending the older because it's the only form in the dictionary. The newer is more understandable, more evocative and more logical, so it deserves to take over. = = = = = Smither: Another bonaprop from a similar source. After all, this is a Pope who has been perfectly happy to canonize his favorite confrère as a birthday present to himself: who is content to govern outside the constitutional structure provided him; who appears perfectly willing to let the men supposed to be his closest advisors say what they will about his leadership, while keeping his own counsel when it comes to decision-making; and who understands, without either a shadow of doubt or a smither of ambiguity, that he is in charge. Can't tell if it's an intentional backformation from smithereens or just an accident. In either case it's an excellent coinage. = = = = = Type-o: In an unusually realistic ZH article on the bitcoin scam: There’s a token issued by Stratis, for example, that is up 101,168% since its ICO last summer. The NXT token is up 672,989%. Those are not type-o’s. Is type-o a type-o?** = = = = = Who is who: Also from ZH, which is getting sloppy lately: And just like Theranos, the Honest Company had managed to drag in the "who is who" of venture capital, Classic hypercorrection. Can't end a sentence with a preposition, can't use split infinitives, can't use contractions. As with all such "rules", the result is absurd. Who's who isn't just a standard phrase, it's a trademark. = = = = = Metrology sidenote: Those percents could be numos instead of typos. Using XXX% up or XXX% down is inevitably confusing, unless the percentage is quite small. It gets even more confusing when the base number is itself a percent. When interest is "up 5%" from a 2% starting point, does this mean the current rate is (.02 + .05 = .07) or does it mean the current rate is (.02 * 1.05 = .021) ? Those are distinctly different results, and nothing in the phrase leads you to decide which is correct. Ideally ALL changes should be specified as multipliers. This would make the above giant percentages easier to see, and it would eliminate confusion in the percent-of-percent situation.