Sunday, December 04, 2016
Still wondering about Wilson I'm still trying to figure out how and why Wilson's globalism halted quickly after Wilson was gone, while Truman's globalism continues expanding even after it no longer serves a purpose. The latter is normal default Parkinsonian behavior for bureaucracies. The former is wildly abnormal and needs an explanation. Wilson created vast bureaucracies in shipbuilding and food, both of which expanded massively to cover pretty much all business in the USA. Both were gone by 1920. Folded up and went home. This collection of rulings and regulations by the US Food Administration shows the vast expansion toward perpetuity. The last section was written in mid-October 1918. Not even a hint that Armistice was approaching. Example: 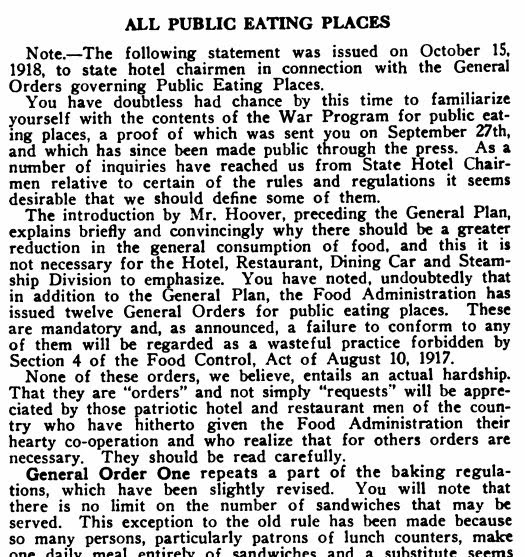 Oct 15, just three weeks before Armistice. Extending their power to cover all restaurants and dining cars, with mandatory orders covering each type of food, with exemptions for certain forms of sandwiches, and exemptions to the exemptions for poached eggs on toast or shit on a shingle.... etc, etc, etc. Herbert Hoover, champion globalist and Leninist, was in charge of this monstrosity. Why did he give it up? A look at Harding's admin doesn't help. Most of this stuff was repealed or canceled just before the 1920 election. Harding pulled occupation troops out of Europe but didn't seem to play a part in cranking down the bureaucracy. As abovementioned, the Army was operating on the opposite set of assumptions. Our counterproductive "nation-building" in Russia was structured on a postwar basis BEFORE Armistice. We were working with Czechoslovak troops, named as such, before the Austro-Hungarian Empire was dissolved. Clearly the Army had a more realistic picture of the real schedule and the real outcome. Contrast with the endgame of WW2, where the Army AND the regulatory bureaucrats knew in February that the war would be over in August.  ¶ 11:19 AM