Monday, April 25, 2016
Something wrong with this The feds are mounting a campaign for better re-entry of prisoners after release. Basically a good idea. This part doesn't sound right:

Lynch is asking governors (and in D.C.’s case, the mayor) to allow inmates to use the identification cards they are given behind bars, as well as official release documents, as the primary identification they need to obtain a state ID card. Without access to birth certificates or social security cards (or the money to purchase copies), it can be nearly impossible for the formerly incarcerated to get ID — and a lack of identification is an additional barrier to successful reentry into society.

Without access to birth certificates and SS cards? You don't lose those documents in prison. My SS card is the same one I got at age 16. 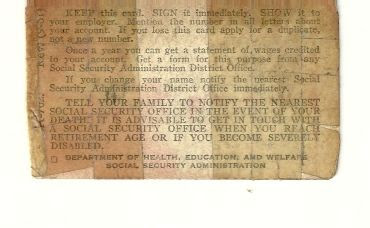 Prison authorities kept it in an envelope along with the other stuff that was in my pockets when arrested. (Pencil, keys, billfold, pipe.) I didn't carry my birth certificate around, so it wasn't in that envelope. My parents had it, and the authorities didn't confiscate it. This sounds like a sneaky attempt to automatically naturalize illegal immigrants. THOSE are the people who don't have an SS card or birth cert. [Later sidenote: When I glanced at the picture above without reading the context, my instant first thought was "Oh, this must be one of those Kansas State Historical Society artifacts... but I don't remember writing about this one." A fifty-year-old piece of paper, preserved by jury-rigged Scotch Tape lamination at some point.... Yup, artifact. Like its owner.]