Sunday, April 24, 2016
Declining wages: purely modern One of Polistra's main missions is to find a proper understanding of the 1930 Depression. Recently some articles have been appearing in Stockman and ZeroHedge, claiming that the current long-term loss of wages and manufacturing is similar to what happened in the '30s. It's just another case of supply and demand. When jobs are scarce, wages go down. = = = = = Nope. This graph is 'total compensation per hour worked' for manufacturing workers.

Steady upward climb. Nothing special about the '30s. The number of JOBS certainly decreased for a while, but the pay for workers who HAD jobs continued to rise. If you lost your job, it was worth your time to look for another job in the same industry. Employers were NOT trying to drive down wages by firing people. They didn't want to fire people, and wanted to get good workers back when conditions improved. = = = = = 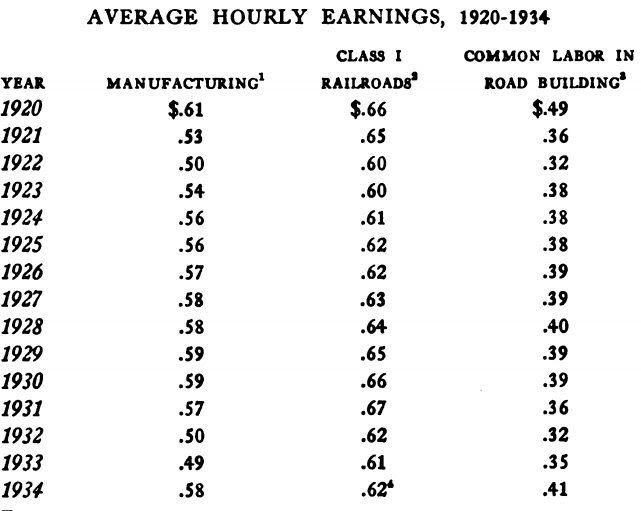 This list shows the pattern in finer focus. In these specific job areas, wages went down in '32 and '33, then started back up in '34. = = = = = Under the current Free-Trade regime, REAL VALUE work has been losing both jobs and wages for 30 years. If you lose your job, you don't have a chance of getting it back. Your skill is no longer needed, which means YOU are no longer needed. Your friends who are still working are making less every year, so you don't see much point in even trying. Result: Alcohol, oxycontin, crime, suicide. = = = = = Another chart from the same series, reinforcing the notion that employers WANTED to keep going in the '30s:

Number of operating businesses went down some in '31-'32, then resumed growing, roughly where it would have been without the bubble of the 20s. (I added a suggestive dotted line.) Number of firms went down more strongly in WW2. Reason obvious. Boss and workers are all in the Army; even if they aren't, there's no raw material available to process or sell. This graph seems to be peaking and turning down after '60. I can't find a more modern continuation. Census data has graphs for 'number of establishments', but those graphs don't match this one.