Tuesday, October 20, 2015
Unvictims "News" is yammering about a settlement of Madoff's theft. Madoff was caught and jailed, of course, because his victims were People Who Count. "News" described this theft of 17 billion as the "biggest financial crime in history." Well, it's big. I'll grant you that. And the victims are actually victims, though most of them were rich enough to CHECK OUT a scam that looked too good to be true. But the SIZE of Madoff's crime is microscopic compared to the crime still being perpetrated by the ZIRP central bank. Trying to quantify the crime..... The total of all money-market (savings) accounts is hard to find via Google. This may or may not be correct: 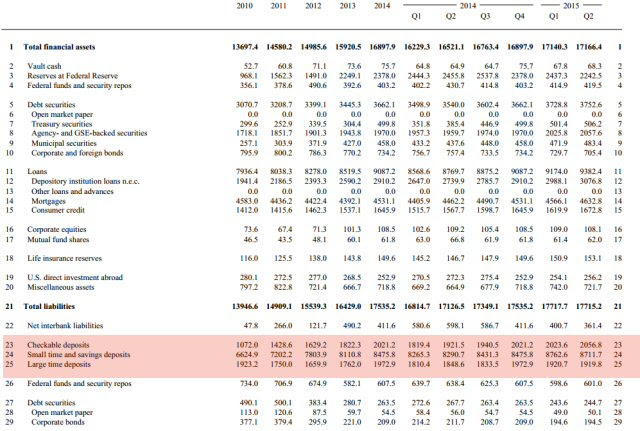 Table is on p 100 of this PDF. The three highlighted rows seem to be savings account type stuff, though I may be misinterpreting terms. These three rows total about 12 trillion in most of the years on the chart. (Looks like 2 + 8 + 2 trillion typically.) Taking 12 trillion as the total, ZIRP has stolen: 5% of 12 trillion per year = 600 billion per year. Not compounding, just multiplying by the 8 years since 2008 = about 4 trillion total. That's the amount of money STOLEN by ZIRP banks since 2008. Ordinary people would have been able to spend 4 TRILLION EXTRA during those years, if banks had been operating LEGALLY. That's 4 TRILLION REMOVED from real wealth. You dare to fucking WONDER why ZIRP and QE didn't ADD any fucking wealth effect? Chutzpah. Monsters. Of course you don't really fucking wonder because you egregious murderers KNOW exactly what you're doing. Killing the poor and the middle. My own personal share of the robbery is about 24k, or two years of typical living. The Fed Mafia owes me two years of income that they STOLE. Wouldn't you say that 12 trillion is bigger than 17 billion? To be exact, it's 700 times bigger. But most of the victims of this crime are Unpersons, so it's an Uncrime.  ¶ 8:00 AM