Friday, October 16, 2015
Scrip ideas 3 Just for fun and inspiration I bought some scrip on Ebay. These were issued by the chamber of commerce in Clay Center, about 50 miles west of Manhattan. I remember Clay Center as something like a flat version of Manhattan, well organized and reasonably prosperous. Googlestreet shows that it hasn't changed much; still looks reasonably prosperous, unlike many small Plains towns. 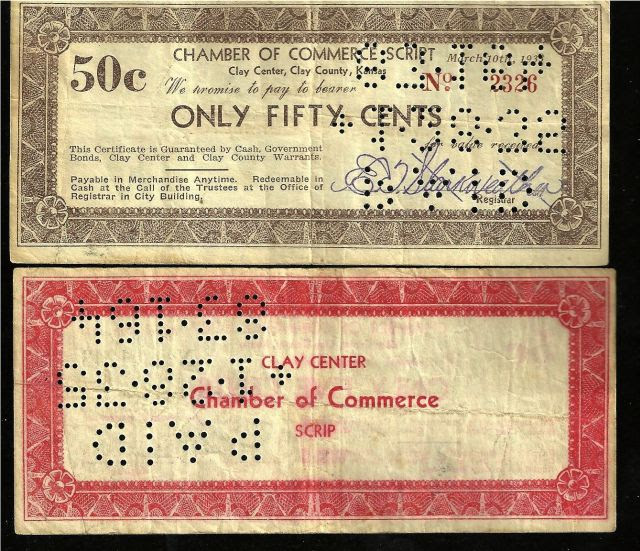 The scrip is also well organized. Probably done by a local job printer using stock scrollwork, with Mr Starkweather's beautiful signature overprinted on a woodcut, then a third run for the number machine. Nice '30s fonts mixed with roman and good old Record Gothic. The only fault is that some of the bills say Scrip and others say Script. Probably hypercorrection by the typesetter. The paper is rag, not pulp. Satisfying texture, feels like pre-hologram dollar bills. A value-carrier needs to feel substantial. The text navigates between legal rocks and practical sandbars: This Certificate is Guaranteed by Cash, Government Bonds, Clay Center and Clay County Warrants. Payable in Merchandise Anytime. Redeemable in Cash at the Call of the Trustees at the Office of Registrar in City Building. In other words, this is real value within the walls of Clay Center. It is portable labor, portable merchandise. We want you to believe we have some cash on hand, but we'd REALLY rather you wouldn't try to exchange the scrip for cash, and we'll make it VERY hard to do so. This was a lot of work for a city of 4000. Just about every city of every size took a similar amount of trouble for a situation that lasted a few months. I expect the governments and chambers of commerce were realistic enough to foresee a much longer emergency. Realism is extinct now. = = = = = A couple days later, extending the last paragraph. Why was scrip needed? Because FDR had the guts to HALT normal banking activities and CLEAN UP the evil banks. When a system has grown hopelessly corrupt you CANNOT CURE IT by twiddling and adding more bells and whistles. You can't overhaul an engine while roaring down the interstate. You need to STOP EVERYTHING, remove the bad parts, cast and grind and polish new parts with a new design, and then give it some testing time. That's exactly what FDR did. He counted on those Chambers of Commerce and local officials to create substitutes while the big machine was down, and they CAME THROUGH MAGNIFICENTLY. Bless them. We need to do a Holiday again on the banking system, along with the court system. Halt all hearings and trials, pour newly arrested criminals into holding camps, remove all vile filthy suicidal so-called "laws" and procedures inserted by black-robed demons. We are incapable of writing or designing anything remotely sane, so the only fix is a System Restore. Delete 2015, restore 1936, shutdown, cold boot, shoot anyone who complains, beta test, then filter the holding tanks back through the NOS court machine.