Wednesday, October 28, 2015
LeSaaaaaabreeeeee Got a new read-while-eating book from Alibris. A coffee-table picturebook about Russian limousines. It has lots of familiar pix of the Packard line, starting with the ZIS110. 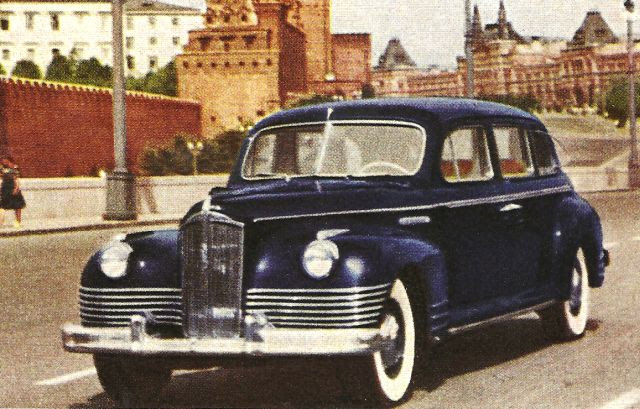 American car writers have been Rectifying** this car lately, attempting to erase all past alliances with RUSSIANAGGRESSIONAGGRESSIONAGGRESSION. The facts were formerly well known in both countries, and Russians never tried to hide the facts. From the book:

This vehicle came about after Stalin held discussions with American leaders, including the President, about the use of tooling and equipment to create a new limousine for state occasions, and to enhance Soviet prestige at home and abroad. The result led to permission to use aspects of the design of the Packard 180 for the new model. ... In 1942 a Russian delegation, believed to be from Amtorg, was dispatched to USA to arrange the purchase of body dies and presswork from Briggs Body, and the design rights from Packard.

Clear, with lots of details. The book has some less familiar and purely weird cars. The ZIS111 departed from the Packard line. This is a nice design, not a direct copy, though it has a strong Caddy/Buick flavor. (Would a '56 LaSalle look like this?) 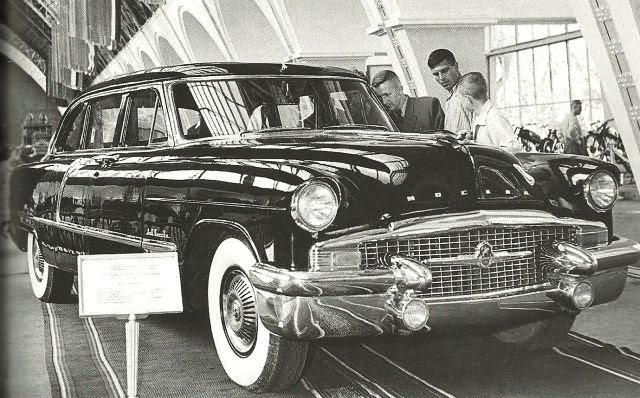 The GAZ12 was pretty much a '52 Chrysler limo with a Buickish front end, and with pure Dodge Fluid Drive. Russian designers let their imaginations run wild a few times, but still with American inspirations. This sportster is clearly a Liiiiiincooooooln Zeeeeeephyyyyyyr. Or maybe a Continentinentinentinental.

And this one is Harley Earl's LeSaaaaaabreeeeee dream car turned into something like a ute. Or a nightmare. 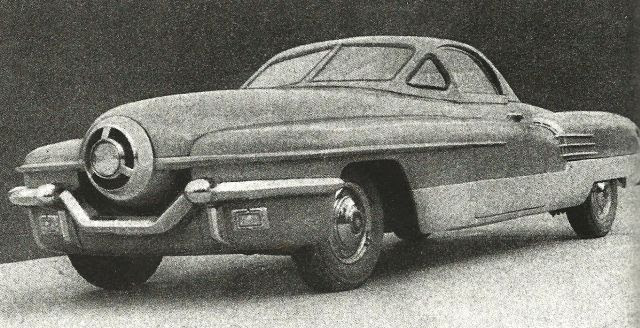 = = = = = Later, after reading more of the book ... Some of the American influence is simply copying. Flatout plagiarism. But the Buick and Earl influences are not plagiarism. Harley was hired as a consultant by the first Soviet auto company in 1932. The immediate result was the Leningrad L1 limo, which was a '32 Buick. The book doesn't say if Earl continued to consult, but it's a reasonable assumption. = = = = = ** Footnote on rectifying. Attempted revision, from Collectible Auto mag, February 2007, article on all '46 cars: Legend persists that the senior dies were transferred to Russia where they were used for the ZIS, but comparison of surviving ZIS cars to the Packards shows that their contours are significantly different. But they weren't even reading their own previous texts. From Collectible Auto mag, April 2006, article on the Packard Proving Grounds: Altz, who worked at the Proving Grounds from 1934 to 1956, recalls another near-accident soon after the war. "I was checking a ZIS, a Russian Packard, at high speed, probably a little over 100. This guy was running across the infield in a Packard at a pretty good clip and must have fallen asleep. At the last minute I realized he wasn't going to stop. I slammed on the brakes and he ran right across in front of me. That was a close one." Why would Packard be testing the ZIS if there wasn't a contractual arrangement? A contract is not a legend.