Tuesday, July 28, 2015
This hour's vain thing Why do the people imagine a vain thing? Good old line from Messiah, or I guess originally from Psalm 2. Pretty much applies to all things in US/UK/EU. Vain in both senses. Vain as in futile, vain as in narcissistic. This hour's example of a vain thing: 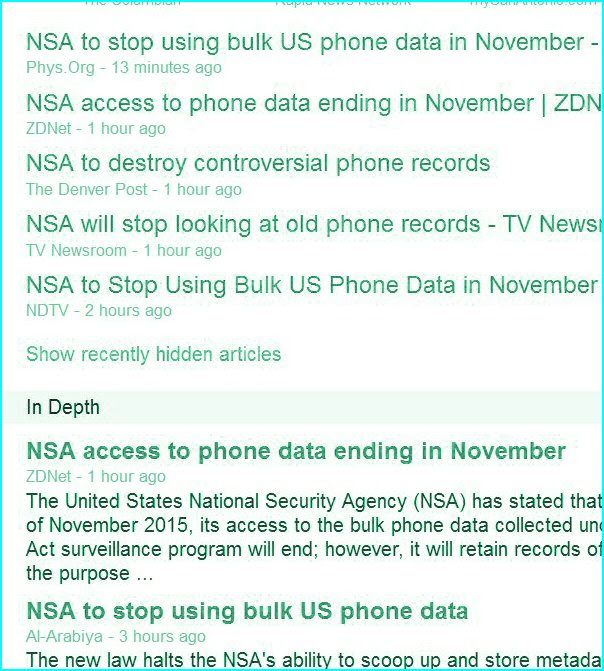 All the stories agree. NSA will stop gathering metadata on phone calls. Everyone with a grasp on reality knows that this is completely vain as in futile. Simple fact: NSA does not use laws. Since its inception, NSA has always monitored everything physically possible, limited only by technology. And NSA's tech has always been several years ahead of vulgar commoner tech. Why do the media imagine this vain thing? Why do they take counsel together and agree to propagate such a bizarre delusion? Because they're vain as in narcissistic. Not looking at the world, only looking in the mirror and seeing Angelic Marvelousness. A non-vain headline of the event in question would be more like: Piece of paper contains words and the acronym NSA. That's as far as you can go without running off the end of reality. = = = = = The next few lines of the Psalm are also instructive. The kings of the earth set themselves, and the rulers take counsel together, against the Lord, and against his anointed, saying, Let us break their bands asunder, and cast away their cords from us. Breaking the bands of reality, casting away the cords of fact and logic and morality. He that sitteth in the heavens shall laugh: the Lord shall have them in derision. Hmm. Would be nice, but not much evidence of it. Then shall he speak unto them in his wrath, and vex them in his sore displeasure. Who's doing the vexing? Well, ISIS and Boko Haram fit the role of God's Hand in the Old Testament. But they're not vexing the places that are ferociously breaking the bands asunder; instead they're vexing places where most people are still on the Lord's side. Seems like another vain thing as in wasted effort. Need more accurate vex vectors.