Monday, November 10, 2014
Can't get ahead of Ma Nature. Last week I claimed that radio was invented at "just the right moment", not too early or late. Plenty of other pieces had to be in place before sound could modulate electromagnetic waves. Well, I was off by 100 million years. As always, Nature got there first. Not just radio, but FM Stereo and LORAN! Nature approached radio from a different angle, working mainly on the electrostatic or capacitive side of waves. Our first approach (eg Faraday and Hertz) was via the electromagnetic or inductive side. Electric eels are very well-known, and the fact that fish (and insects and plants) can sense electrostatic fields is moderately well-known. But the details of radio direction-finding and radio communication by a few fish are still obscure. Only a few researchers have been looking into this, and it's only marginally understood. Fish that talk and search by radio live mainly in muddy equatorial rivers where vision doesn't help much. They use a variety of waveforms, from sine to single repeated pulses to modulated interrupted waves. The pulse-repetition frequencies are in the same range as mammal voices, from a few cps to a few hundred cps. On the sending side their mechanism is relatively simple. Just a sequence of neurons that send positive and negative fields directly into the water, instead of sending positive or negative fields into the next neuron as they would do inside the nervous system. In some fish the sending organ is a long antenna: 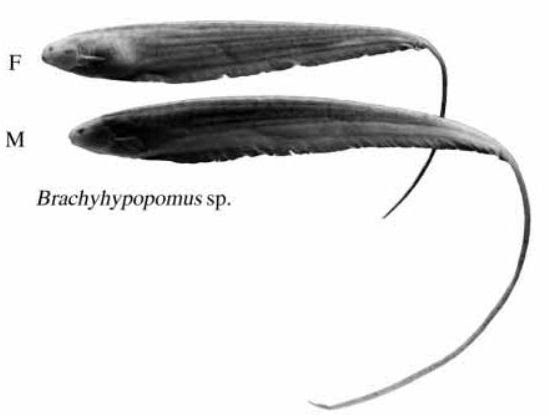 containing lots of neurons that can be pulsed or modulated together or separately. The length and width of the antenna vary by subspecies, specifically matching the impedance of the turbid water that each type normally lives in. (Aw come on, Ma. Do you have to think of everything? Yes.) Other fish have sending organs on each side of the body, producing stereo waves that can be modulated differently for a LORAN-like direction sensing operation. Each fish constantly monitors its own pulses, and changes frequency when it 'hears' another fish using the same freq. The receivers are more complex. They are inside pores in the skin on the fish's head. Here's an animation of three receivers in their pores.

Each pore is filled with insulating jelly. The jelly makes contact with several hair cells, similar to the hair cells in our cochlea. As the varying charge field passes the face, the jelly expands and contracts in a form of electrostriction, similar to a crystal earphone. (In an insulator, charges don't move around much. So an incoming positive field charges all the atoms of the insulator positively, which makes them repel each other. The insulator thus expands slightly. An incoming negative field does the same. When the field is zero, the insulator is relatively contracted, not repelling itself.) The jelly is thus the 'detector' or first-level transducer, in a system that is otherwise similar to our hearing sense. [Later thought: These organs must ALSO pick up sound. No way around it. So the fish is hearing acoustically and electrically at the same time through the same system! Sort of like those humans who hear nearby radio signals through tooth-to-filling rectification while hearing regular sound through their ears. Researchers are focusing their observations and experiments on the electric stuff, which is definitely the more unusual and interesting part ... but maybe they should also focus on how the fish separates the two types of input. Is the jelly designed to move in different directions for electrostriction and acoustic vibration, with distinct hair cells for the two directions?] What does this communication sound like? A couple of Youtube clips feature Brachyhypopomus fish interacting. These clips are undescribed, but there is apparently a 'radio receiver' or induction loop in the aquarium that picks up the waves and turns them into sound. We're hearing the constant pulse stream from both fish, roughly 40 cps if my guess is right. (Sort of like communicating by turning the throttle on a lawn mower!)(I'll leave the more accurate metaphor to the reader.) In this clip, two males are interacting aggressively. In this one, a male and female are courting and spawning. Note the moment of decision. Not quite Harry Meets Sally, more like "You'll do." The earlier research back in the '50s was headed by Ted Bullock, who was pretty much the wellspring of everything interesting in communication methods. The current kingpin is Carl Hopkins at Cornell. I took the antenna pic from Hopkins's online material, and based the animation on one of his figures. = = = = = This might explain why Phoning For Fish works so well on catfish. (Mud dwellers, thus likely radio operators.) When you crank those old farm phone magnetos, you're not sending a DC charge into the water. You're sending a pulsed wave in the same frequency range that fish use for their own QSOs. The poor catfish imagines a HUGE enemy invading his territory, and gets the fuck outta there.