Monday, October 20, 2014
Happy Birthday Sputnik part 2 While I was shopping on Ebay for 'Soviet radios', this thing came up. It's not a radio, but it's closely related to radio. It was expensive ($150) but it tickles so many of my passions that I just had to buy it. Life's short and all that. 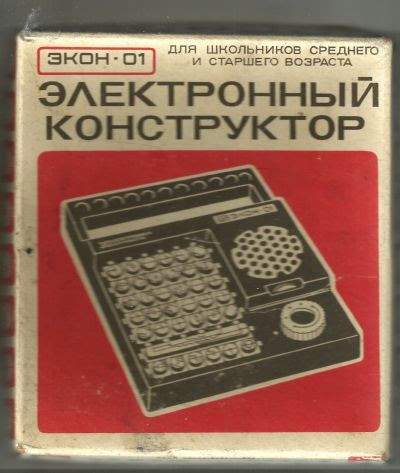 Электронный конструктор was a school electronics learning 'toy', aimed apparently at junior high level. It was made in 1983. Excellent illustration of the Soviet approach to education. Hands on, muscle memory, little theory. All the right things. At the same time, of course, American education was nothing but rote memorization of insane theories. We still haven't broken out of the idiot rote model, though a few scattered bright spots are popping up. This difference arises from different levels of CONFIDENCE by government. Learning by discovery puts kids in direct contact with REALITY. If you're confident that your system will survive a brush with reality, you allow learning by discovery. If you're afraid that your kids might question your system after encountering reality, you keep them in a rote bubble. I'd imagine Экон was used in school sort of like this: 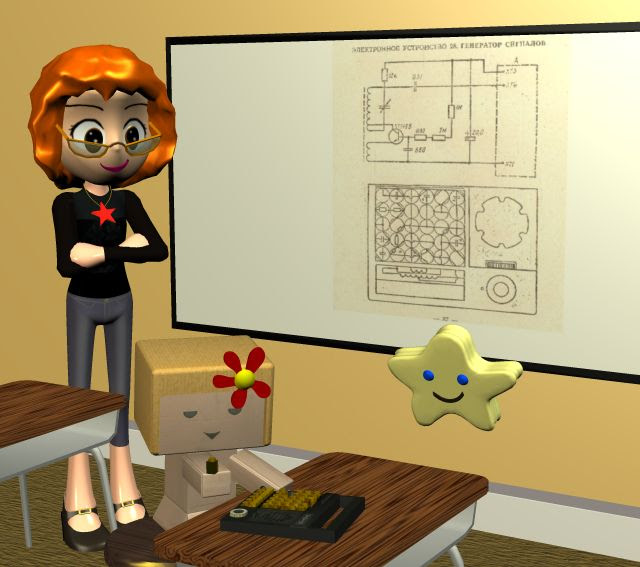 The base part was designed to look like a radio. 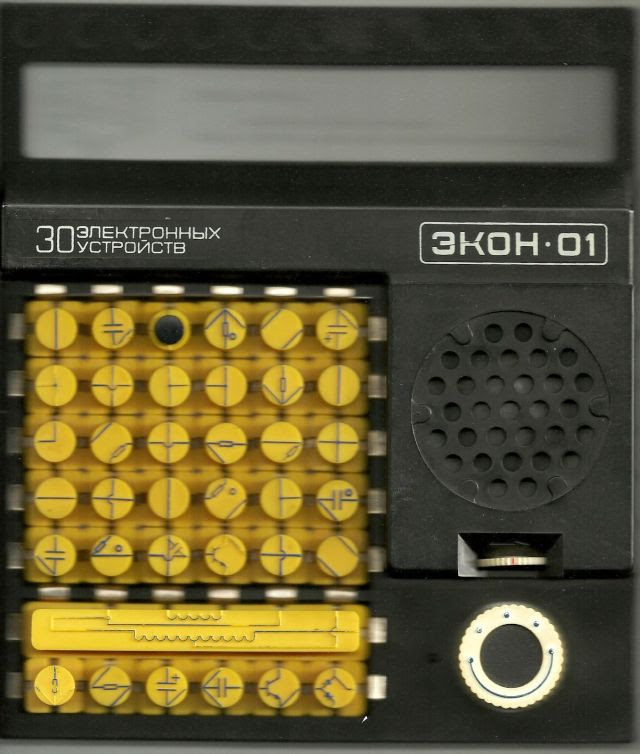 Экон has four 'rooms'. Just under the handle is a compartment for 6 AA batteries. The right side room holds a speaker and volume control, with an audio amplifier behind it: 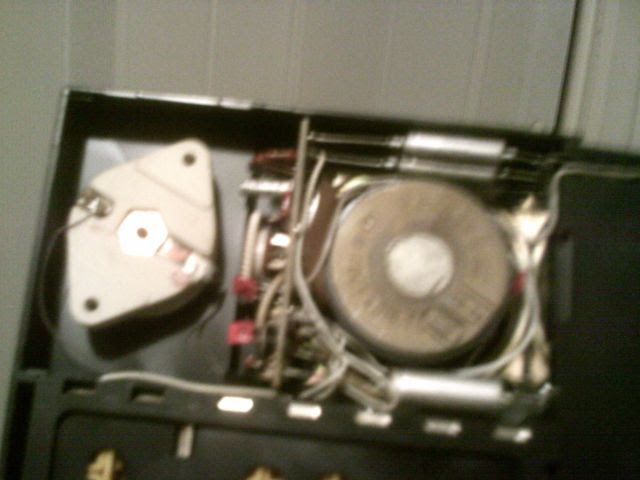 On left in this picture (lower right on the case) is a tuning capacitor. This is a heavy-duty ceramic cap, suitable for high-voltage use. It doesn't match the other battery-duty components; must have been military surplus or something. A little booklet included 30 different circuits to build, ranging from a signal generator to a siren to several simple AM radios. 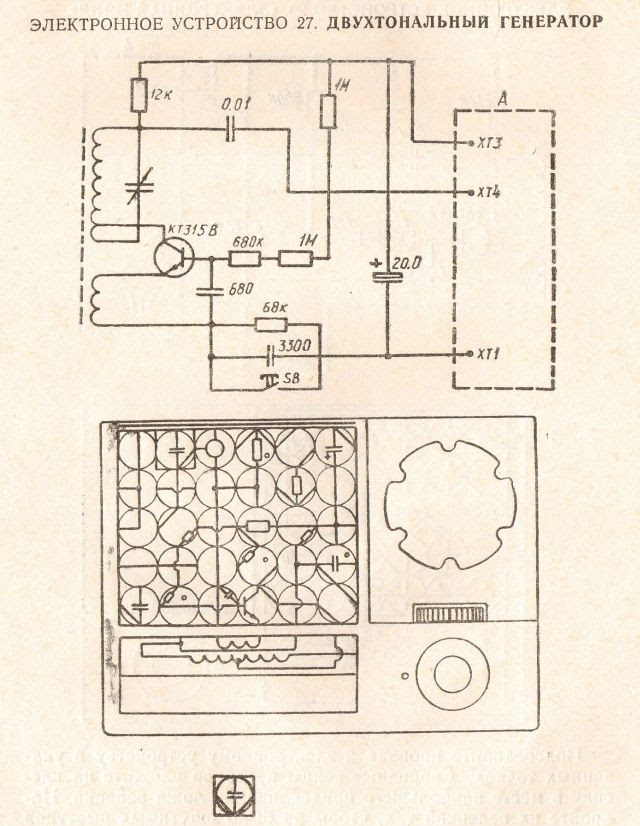 Here's the clever part. You build the circuit by inserting the correct pattern of modules in the middle room, like a jigsaw puzzle or a chess problem. Each module is hollow and contains what it says on the top. Straight wires, T-junctions, caps, resistors, transistors, one push-button switch. Each module can be inserted 4 different ways. 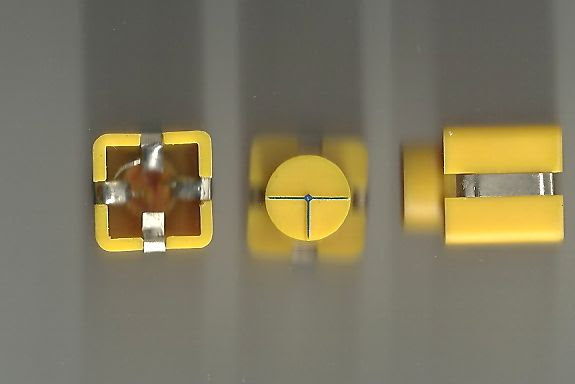 The lower room contains the antenna/inductor, which was designed to serve either as the input tuned circuit and antenna for a receiver, or as the inductive side of a Hartley oscillator. This big antenna module is removable but in practice it always stayed right there, with custom connections along the middle partition. Under the antenna is a 'dead' row with no actual connections, to hold leftover modules. Экон gives you a nice initial introduction to circuitry. You learn to compare the schematic with reality, and you get an INTRINSIC REWARD when it works. Hear the siren, tune the stations. After Экон you're more ready for serious breadboarding, where you need to select components and solder everything. 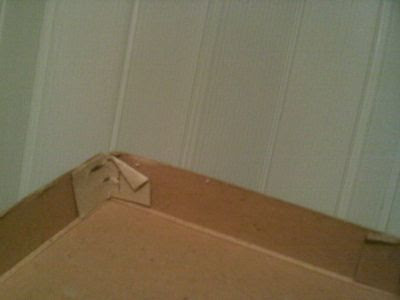 Even the box lid has been MAINTAINED. = = = = = What's the moral of the story? Self-sufficiency. (1) When kids are educated through HANDS and MUSCLE MEMORY, they gain a deep and unremovable knowledge. Soviet math and science education did this. American math and science education relied on rote memory, which is shallow and removable. (Our response to Sputnik led to even more rote memory of even crazier theories.) When you've learned through direct sensory and muscle experience, you know how things work. You can thus develop new strategies when you encounter new situations. You are SELF-SUFFICIENT. (2) Making things. Before WW2 Americans made everything we used, and paid Americans to make things. After WW2 America started outsourcing. Solid-state electronics was the pioneer of outsourcing. At the same moment as Sputnik, Japan became very good at making transistor radios, and we unconditionally surrendered to them. We allowed our own radio industry to collapse, because the Sacred Theory Of Open Borders must be obeyed AT ALL COSTS, especially including national suicide. Russia didn't make the same mistake. A close examination of the internal parts of this gadget, and the internal parts of the VEF shortwave radio, shows that all the components are Russian-made. They look different from American (Chinese) parts. = = = = = When you make things internally and repair things internally and educate for self-sufficiency, you maximize your survival. And we can see the difference RIGHT NOW. BBC reports that Russian farmers and manufacturers are quickly picking up the slack now that imported food has been stopped by our sanctions. (By the way, isn't it just wonderfully ethical that we attack Russia and then slap Russia with sanctions for DARING to answer our attack? Fucking chutzpah as fucking always.) From BBC:

But there has been no broader backlash. In fact one poll published this week revealed that most Russians believe sanctions can actually boost the economy; two in five told the Levada Centre they would accept an even bigger ban on foreign imports if necessary. That is partly because supermarket shelves have not emptied here - it is their content that has changed. At one central Moscow store this week the dairy counter was full of packages labelled Edam, Gouda and Ricotta - but on closer inspection much of it was made here in Russia.

Incidentally, Toldja so. Summing up: Protectionism protects more than your industries and jobs and economy. Above all it protects your CIVILIZATION and your HUMAN CAPITAL. If you're accustomed to making things and fixing things internally, you KNOW HOW to make things and fix things, and you KNOW HOW to adapt to new situations. Those skills don't disappear quickly. = = = = = Poser model is here.