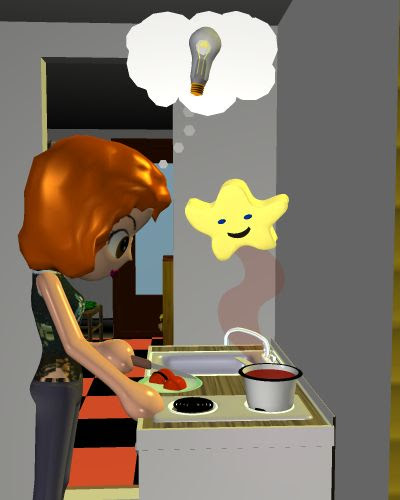 Random little thought while mainly preoccupied with work.... Polistra has often focused on aspects of technology that disappeared into oblivion or disdain, only to return triumphantly when the "right" people "discovered" them. How about disappearing food? It's generally believed that tomatoes and potatoes were known only to South Americans until Spanish explorers brought them to Europe around 1600. There's no evidence to counter this belief, perhaps because nobody has bothered to look. Think especially about tomatoes. There's plenty of evidence that humans live longer and better with tomatoes. I've experienced this in my own life. It's a safe bet that we were designed to want and need tomatoes. Did we really get along for a million years without them? Or did we lose them through bad cultivation or bad weather in the Eastern Hemisphere, while the Western Hemisphere continued growing and eating them? Bear in mind that the Western Hemisphere people came from the Eastern Hemisphere to begin with. It may seem strange that we would have specialized connections with certain plants, but why should it be strange? Nearly all animals have specialized connections with certain food sources. We've been smart enough to find and cultivate a huge variety of foods that we like, but that doesn't exempt us from having specific needs and wants before we started farming and cooking. Putting it another way: Nature doesn't assume that a bee or a crow or a koala will learn which foods to eat through spoken or written transmission of culture. Nature gives those animals a specific sensory template to recognize their proper and necessary foods by sight and/or smell. Since we didn't have spoken or written transmission of culture until rather late in our existence as a species, how did we know what to eat before we had words for things? Only one possible answer. We were given a specific sensory template, just like every other animal. = = = = = EPIPHANY = = = = = June 24 update. Figured it out. Found the key. NICOTINE. Tomatoes have a noticeable and tasteable trace amount of nicotine, as do most fruits. Conventional wisdom gives us one fact about plants and two facts about humans. Plants: Contain nicotine to repel and poison insects. Humans: (1) Strongly addicted to nicotine. (2) Nicotine makes us calm and alert and sociable. But why should we be addicted to nicotine if it's just a bug poison? And why should it have positive effects on us? Doesn't make a lick of sense. We're not bugs. Think in Grand Blueprint terms. Inescapable conclusions: Nicotine serves two purposes in plants. To poison bugs and to attract mammals, so the mammals will eat the fruit and poop the seeds elsewhere. We are the plant's wings. Nicotine serves two purposes in humans. (1) It serves to attract us and addict us to fruits, so we will gain the other necessary nutrients in fruits. (2) When we consume nicotine we get along better. Societies that get along better last longer. It's a double win on both sides, though we probably get the best end of the deal. Plants get wings. We get nutrition from fruits, and those of us who eat fruits last longer as individuals AND as civilizations, giving wings to more plants. This probably applies equally to other omnivores, and applies equally to alcohol. Squirrels and bears clearly enjoy fermented fruits. Nature's way of shaping omnivores toward the healthier side of our range of consumption. Nature always knows what she's doing.