Wednesday, September 04, 2013
Metrology in semantics Polistra is a great fan of metrology. Calibrate your instruments correctly, find a baseline, measure carefully, know the meaning of the measurement, and use appropriate methods to cook up a normal or typical measurement. New realization: Measurement of meaning is just as important as meaning of measurement. Words may appear more slippery than length or temperature, but they're not all that unusual. As with length or temperature, we can measure the meaning of one word in the context of one sentence with great precision. And just as with length or temperature, we can find a typical or normal meaning by mixing or superimposing many individual readings. We don't have closed-form equations for this style of median, but lexicographers (the metrologists of meaning) have objective ways to derive it. [Sidenote: Lexicographers are unique among modern academics. They are consistently humble and open to change, and never issue arbitrary or political dictates.] 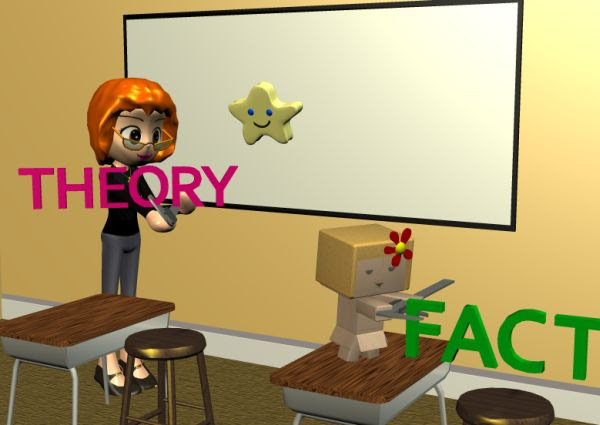 Bad science shows its satanic claws by mismeasuring Nature, AND by mismeasuring words. When you see a deliberate attempt to force a new meaning onto a word, you're seeing Satan's science. FACT and THEORY are the primary targets of Satan, both in Climate Pseudoscience and in the disputes over evolution. The Satanists insist that "global warming" is a fact, not a theory, and they insist that "evolution" is a fact, not a theory. Their purpose is tyrannical. Everyone says that there's plenty of room for argument about theories but there's no room for argument about established facts. After pushing a disputed theory into the realm of fact, Satan will be able to stop all argument against his mass-murdering obliteration. Fact and Theory are not the same thing. A fact (in scientific context) is a properly measured and calibrated observation of some aspect of Nature. A theory is an attempt to explain how facts fit together, with the hope of predicting future or distant actions from known relationships. Evolution attempts to fit the facts of Nature into a coherent pattern, thus Evolution is a theory. The Carbon Cult doesn't even deserve the name of theory. It starts with intentionally wrong measurements and tries to shoehorn them into a pattern based on an untested hypothesis that is demonstrably backwards.