Tuesday, August 20, 2013
How math doesn't work It appears that 'conservatives' are mounting a campaign against the Common Core curriculum. Seems to pop up often among the columnists and second-string radio yakkers, though it's not nearly as frequent as BENGHAZI. Unlike most political themes, this one runs deeper than labels and insults. For many decades, in both US and UK, conservatives have pushed rote memorization with a strong focus on theory. Back to the basics is their constant slogan. Currently in UK, Education Minister Gove is advocating for rote memorizing of lists in history classes. Dammit, this is frustrating. Their ultimate purpose is good and appropriate, but their approach is backwards! An article in the latest American Thinker shows this contradiction in math:

In my 20 years in the high school classroom (in Georgia), I've often told my students that studying mathematics is not so much (or at least not only) about mastering some specific "objective" or "standard" (as we now call them), nor is it about making some future use of every little concept that they learn. I point out that these are good things, but the study of mathematics is more. It is also about growing and developing that logical part of their brains that mathematics, in particular, serves. What's more, "mathematical training," as the math department of the University of Arizona puts it, "is training in general problem solving." Or, as Thomas Aquinas College declares, mathematics "prepares the mind to think clearly and cogently, expanding the ability to know."

Proper goal. No problem. But then:

The beauty of Elements lies in Euclid's axiomatic approach... One must, initially, establish and accept some finite set of statements (axioms) without proof. All other conclusions are logically deduced from these initially accepted axioms (or postulates). Sadly, this approach is almost completely abandoned with the integrated mathematics curriculum adopted by the state of Georgia five years ago. Although Georgia recently gave systems the option of returning to a more traditional (Euclidean) approach to mathematics, most stayed with the integrated math. For example, currently, most freshmen in Georgia take coordinate algebra. This course consists of six units. The first three units are algebraic. They involve things like writing and solving linear equations and inequalities, solving systems of linear equations, graphing linear and exponential functions, using function notation and language, calculating rate of change (slope), and working with arithmetic and geometric sequences...

This integrated curriculum doesn't sound 'sadly' to me. It sounds like an excellent approach and a conservative approach. Begin with something visual and concrete (graphing), then work through all the aspects of math you're likely to need in a modern job and modern life. Seeing things in graphic form gives you the best possible tool to detect official lies. Euclid gives you nothing at all. Graphing is dynamic, Euclid is static. Most official lies, whether in Global Warming or Die-Versity or Economics, involve a reverse causation or a false causation. The authorities want to convince us that CO2 causes warming; or that affirmative action removes racial problems; or that quantitative easing improves the economy. If you habitually think in terms of curves on a graph, you can mentally examine phase relationships. You can see that CO2 has always followed warming; you can see that affirmative action accentuates racial strife; you can see that QE does nothing at all to the economy.

Euclid doesn't help you examine any of those things. Euclid teaches you to accept the axiomatic statements of authorities, which is PRECISELY WHAT THE FUCKING COMMIES WANT YOU TO DO. = = = = = Ideally (and conservatively!) we shouldn't even have subject classes in school. What is the deepest distinction between conservative and liberal? Right-wing thinking starts with the accurate understanding that PEOPLE ARE DIFFERENT. Left-wing thinking starts with the genocidal lie that PEOPLE ARE IDENTICAL. How do we educate based on the accurate view? Job training. You have to begin with three or four years of mainly identical rote practice in reading and writing. No way to avoid it. After that, at age 8 or 9, each person shows and knows his proper talents and tendencies. So we should take those distinct passions and use them to the max. Put each kid in a broad training program to develop his own proper skill set, which he understands and likes. Take care of all the necessary subjects within the job-oriented training, in context, at times when they can be used and appreciated. Example: We find that your talents and passions are aimed at cooking. We give you constant practice in the essential skills of food preparation and restaurant/bakery/grocery work, adding more complexity and subtlety each year. Along the road, we take every available opportunity to discuss those other 'subjects' within the context of your passion. History: We have records and recipes from every culture and nation starting with the Babylonians, and we have riots and revolutions caused by inadequate food supplies. Math: Ratios and proportions, metrology a la Fanny Farmer, rate of change in the oven, pricing and taxes on the menu. Economics: Bread gave us the first written economic observations in 300 AD, and wheat is still part of Goldman's evil manipulations. English: There's plenty of good writing about food, and lots of opportunities to watch and produce Youtube howto videos. Chemistry: Cooking IS chemistry. Acids and bases, oxidation and combustion, alteration of proteins and vitamins. Physics: Elasticity of gluten, thermodynamics of burners, viscosity in stirring, friction in non-stick pans. Here's how it was done at Iowa State in 1906: 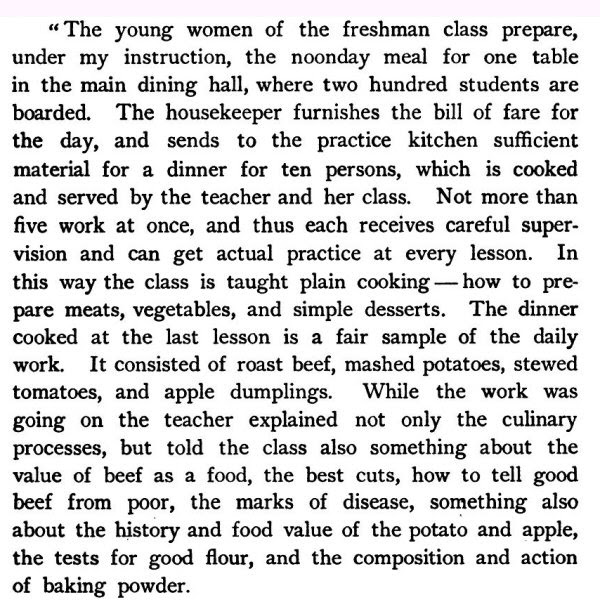 Exactly right, but it needs to start at age 10, not in college. 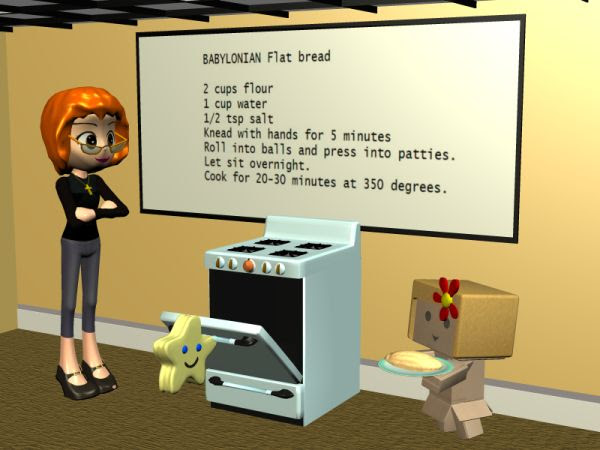 Every major skill field has its own set of connections to each of those supposed 'basic subjects'. Presenting 'basic subjects' on their own is utterly pointless, a total waste of money, time and human capital. Kids learn things vastly better when they understand relevance and connections, when every lesson is a branch of one broad stream always flowing toward the same goal. = = = = = Later footnote: I've always wondered why this form of learning was completely rejected by American schools after it demonstrably succeeded 100 years ago. I've especially wondered why manual training is so fiercely hated by 'conservatives' who should be its main advocates. I suspected that experiential methods had an association with Progressivism, but didn't know how that happened. This explains it. Comrade John Dewey adopted manual training wholeheartedly and infused it with Marxist toxins, stating that the goal of manual training was a classless society. Academics have always pushed Dewey because he's a Party Hero, but they're only interested in the Marxist toxins, not the actual training.