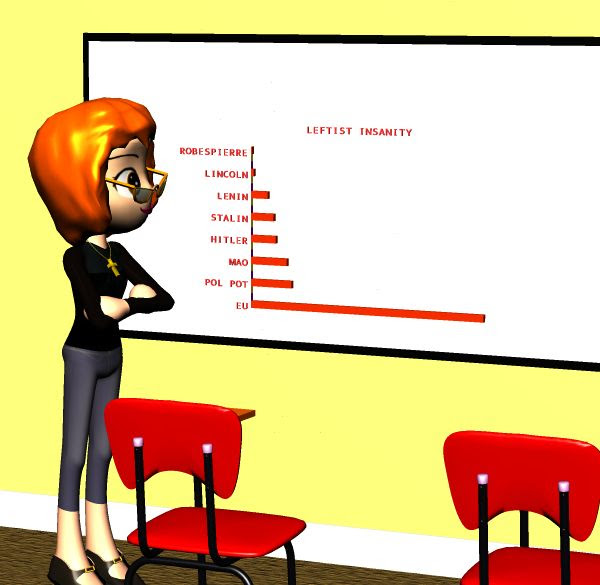 Professor Polistra has analyzed historical instances of Leftist Wackitude. The EU continues to break its own Wackitude records day by day. EU's Three Horsepersons of the Modern Apocalypse (Climate change, diversity, free trade) constantly pull together to form truly unprecedented levels of psychopathic suicide. = = = = = "Global warming" + free trade = An English coal-burning power plant is getting rid of coal, even though abundant coal is nearby. EU regs require civilization to collapse in the craziest possible way, so the Drax plant is switching to "greener" power sources. What's "greener" than coal? Here is the process that is "greener" than coal: (1) Cut down forests in Mississippi and Louisiana, leaving nude land that will erode into the rivers. Remove the pollution-absorbing qualities of forests. Use gasoline to run the chainsaws and the logging trucks. (2) Use gasoline to haul the wood to a chipping plant, which runs on electricity produced by coal. (3) Use gasoline to haul the chips to the New Orleans port. (4) Use heavy fuel oil to ship the chips across the Atlantic to England, and more heavy fuel oil to bring the ships back without the chips. (5) Use gasoline to haul the chips to the Drax plant, where they will finally be burned. So. How is this fantastic consumption of energy and ruining of forests "greener"? Damned if I know. This is EU. = = = = = Diversity + free trade = EU is getting ready to ban pornography on the Internet. What will happen after this? (1) Since most of the Internet is pornography, all of the Internet will detour around Europe, leaving Europe in a pre-1996 tech situation. (2) Europeans who want porn (or pretty much any sort of writing or images, since we know EU's definition of porn will be comprehensive and exhaustive) will have to resort to samizdat-style communication by paper and ink. (3) Since the paper and ink industries will have to be outside Europe, they will be unregulated. Again we'll have forests consumed and land denuded and eroded; again we'll have gas consumption for hauling and coal consumption for processing; and in addition, paper manufacturers are notorious polluters. = = = = = When I get disgusted by the constant march of insanity in DC, I can look to EU for a sort of backhanded relief. We're crazy, but we're not quite that crazy and self-destructive and dirty and polluting and suicidal. Yet.   ¶ 5:44 PM