Wednesday, January 16, 2013
West coast is not part of the Globe I've been noticing that Wash is not participating in the allegedly "global" "warming". Well, is this just Wash? Or is it a Pacific thing? Is the entire west coast of the Americas mysteriously off the "globe"? Decided to use the wonderful TuTiempo.net again. Scanned some West Coast cities in South America until I found two that have decently long and solid records. Lima and Puerto Montt both have records since 1973 (which happens to be around the start of the recent "warming"), so I graphed them and compared with Seattle in the same period. For each city, the top trace is Tmax, middle is Tmean, lower is Tmin. Horizontal axis runs from 1973 to 2012. 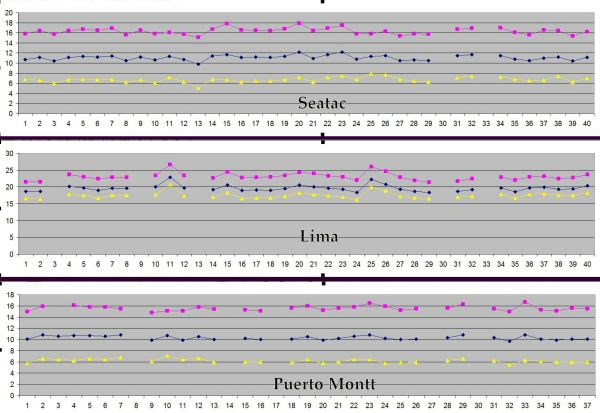 Bigger and clearer graph here. Excel files for Seatac, Lima, and Puerto Montt. Hmm. Guess these three cities, spanning most of the west side of the Americas, are not on the "globe" at all. They have chosen not to participate in the "global" warming. I'm getting more and more convinced that the alleged "global" warming is actually Gulf Stream changes, possibly modulated by geomagnetic weakening through the agency of bacteria.