Saturday, December 15, 2012
Before Morse 1 The basic idea of mechanical signaling was well-known in Europe before electricity arrived. Mirror-based semaphore systems had been used for a century in France and England. So in 1820, when Oersted figured out that an electric current passing through a coil of wire could move an iron bar, the next step was obvious to many inventors and investors. Charles Wheatstone, a 'shy sensitive boy' from a musical family, was one of many who picked up the notion. He had already made some mechanical gadgets to amplify and carry sound, working from his musical genes. Given his acoustic nature, it's sort of surprising that his telegraphs were so thoroughly visual.... but maybe not. All the early telegraphs were visual, using keyboards for sending and dials, pens or printers for receiving. These were intended for personal use by untrained people. After Morse's pen-based system was established, the operators realized they could understand the patterns better by ear. (And that's not surprising, since our hearing mechanism is built for language.) This realization quickly led to a switch from personal use by untrained people to centralized use by professionals who mastered the Code. Keyboards, dials and printers quickly disappeared, and simple keys and sounders became universal. Visual telegraphy might have developed directly into something like today's computer networks, but the auditory Code took it in a different direction, more of a public service utility. Wheatstone connected up with the more practical and business-oriented William Cooke in 1835, and a series of commercially usable telegraphs followed. The first type used electromagnetism directly and simply, with five compass needles responding in opposite directions to opposite currents. Two wet cells powered the sender. A center 'ground' made it possible to energize each of the 5 magnets in opposite directions. 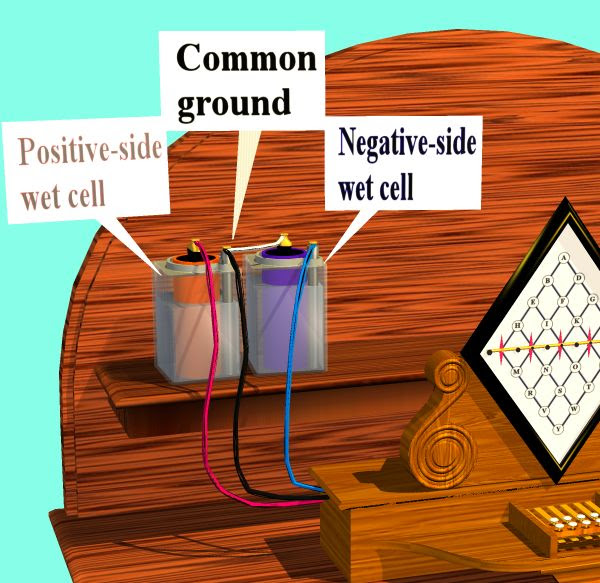 The keyboard continued the two-sided logic. The front row of keys ran through a bar connected to the positive side of the batteries, and the back row ran through a negative-powered bar. When you pushed on one key, it connected either negative or positive voltage to a spring that fed one of the magnets. [Note: the unit I copied for this model had 6 buttons in each row; it appears that the 6th button is a dummy or perhaps drove an alarm of some sort.] 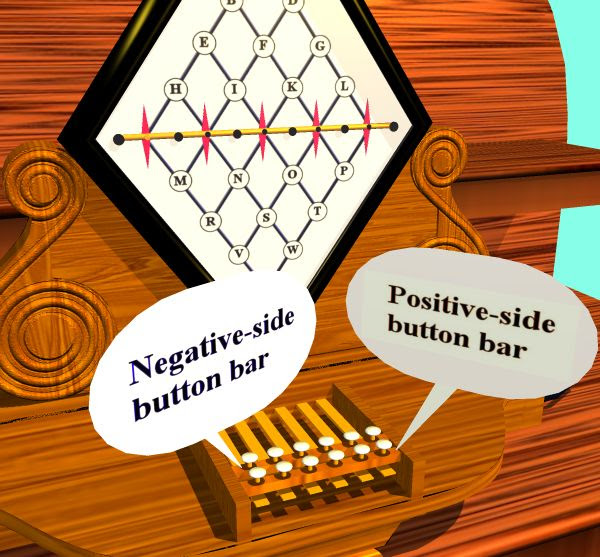 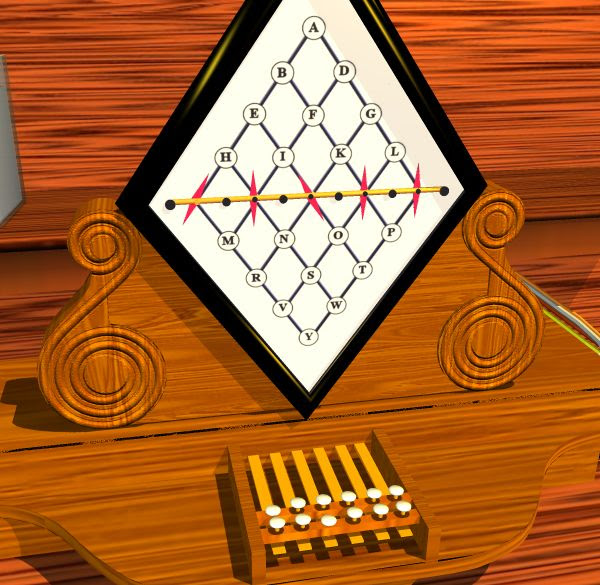 This is a wildly inefficient way of using the available parts. Five needles with three positions should create 243 patterns [from 3 * 3 * 3 * 3 * 3]. That would accommodate upper and lower case letters, numbers, and punctuation easily. But the diamond uses only 20 of the possible patterns, not even 26. Users must have developed a set of altered spellings to work around the missing letters. Apparently Wheatstone thought an easily read 'map' was critically important. Note the six wires leading out the right side. Five active wires capable of carrying negative or positive voltage, and one ground. The receiving unit, identical to the sender, would pick up the combinations and show them on its needles. 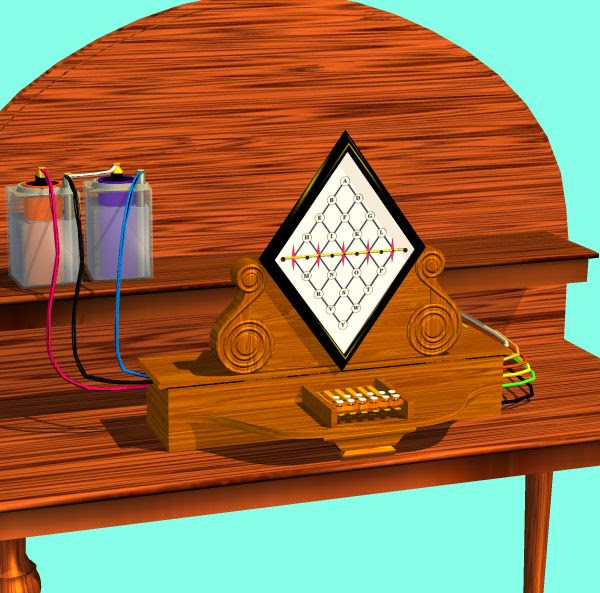 This meant you'd need five wires for EACH individual pair of sender and receiver. 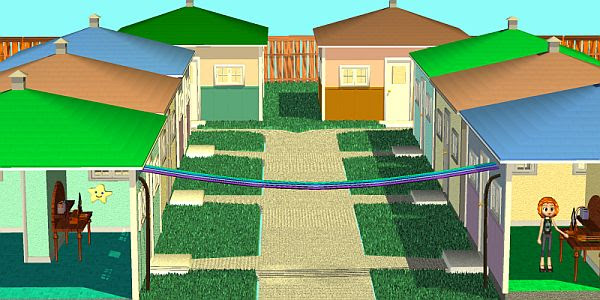 In modern terms this system used 'parallel data transfer'. Each letter could be formed and sent almost instantly, which seemed like an advantage in theory. But 'serial transfer' telegraphs won the game despite their comparative slowness. A serial system takes a finite time to form the pulse pattern for each letter, but it requires only one wire. In real life the materials and labor involved with running wires and selecting circuits made five-wire systems wildly expensive. (Five times the copper, five times as many insulators, five times as much space on each pole, five times as much overhead congestion in cities.... ) Polistra is unhappy with the keyboard for obvious reasons.... 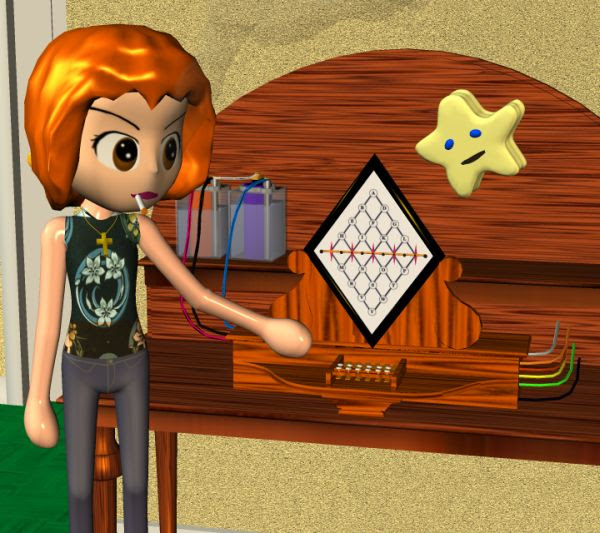 The five-needle telegraph was clearly meant to be home furniture rather than an industrial mechanism. Reminds me of the first generation of personal computers, with keyboard and screen in one unit. Bilateral symmetry seems to have been a strong theme for Wheatstone. Later on, he was responsible for one HUGELY IMPORTANT idea that resonates through all electronic circuitry. He developed the idea of differential measurement, using symmetry to balance out imperfections in the tools and conditions. It's an old idea in measuring weight. By putting a known weight in one pan of a balance scale and the unknown in the other pan, you eliminate everything but mass. Local gravity is the same for both, friction affects the single pivot point for both; wind and humidity affect both sides the same way. Though difference measurement is intuitive in that one case, it took some highly non-intuitive tricks to make it work with electricity. The 'Wheatstone bridge' isn't used much in its original form, but the notion of differential measurement spawned the Operational Amplifier, which now forms the core of most analog circuitry. More broadly, any time you have a 'processing element' of any type, a balanced circuit eliminates non-linear effects. Push-pull amplifiers, the long-tailed pair, CMOS digital devices. Finally, Nature had the idea first. Most of our neurons are built as comparators or balances, with excitatory inputs and inhibitory inputs. Wheatstone's telegraph faded after a while, but his balanced-circuit idea is one of the grandest and deepest of all inventions, right up there with fire and the wheel. = = = = = Later artistic note for Poser types: I've released this model on my ShareCG page, along with the Breguet system and the Gray telautograph. = = = = = Returned to this theme much later with pre-electric semaphores.