Friday, September 21, 2012
Ptolemy as usual Science Daily starts from the fact that the Arctic is warming and the Antarctic is cooling, and tries to connect those opposite movements with Evil KKKarbon. As always, they have to tack on a dozen little 'epicycles' to make their pseudotheory work. None of the epicycles are solid; all are mere possibilities.

Polistra finds this hard to swallow. A uniform source of heat, applied to the entire globe, causes one side to warm and the other side to cool? 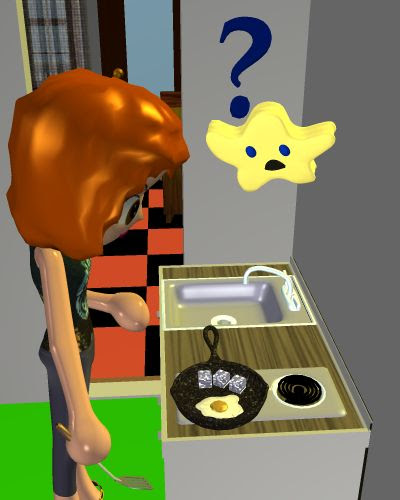 Yum! Eggs with a side of ice, made in one pan!

If some force is causing all water to warm up, it would cause both ends to warm up. The Arctic (which is all water) would warm directly, and the Antarctic by convection from the water surrounding it. Can't have opposite action there.

If some force is causing all air to warm up, it should still cause everything under the air to warm. That's also out.

There's one simple mechanism that could warm one end and cool the other, and it's a mechanism that agrees perfectly with the observed changes. Currents in the semi-liquid core of the earth. Perhaps the liquid is upwelling at the north and descending at the south. This would give the north 'fresh' heat from the center; by the time it reaches the south, the liquid has given up heat to the intervening surface.

And we do know that something big is happening there. The earth's magnetic field is in one of its occasional periods of rapid change, which would imply movement of the semi-liquid core.

On this graph you can see that the latest sudden move started around 1980, which is exactly when the Arctic seems to have started its unusual warming; and it's accelerating sharply since then. (Excel here, based on this info. Y-axis is the move of the magnetic pole each year in miles.) 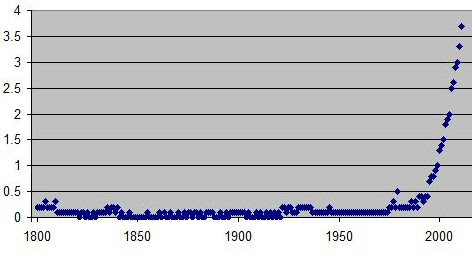 A remarkably strong 'phase-lock' plus a plausible mechanism of action. Sounds like a much more likely avenue of research than anything involving Evil KKKarbon.Maybe it's time for a new Mohole project to figure out exactly how the core is moving?