Saturday, June 09, 2012
What a Plant Knows In the last few months I've been thinking and writing a lot about plants, and acquiring a new respect for their talents. My overall view of life has expanded to encompass the plant-y way of doing things. Before this I had simply paid no attention to plants and knew nothing about them. They're green. Some of them taste good. That was about it.

Realized last week that I've been walking into territory already claimed by Daniel Chamovitz. I immediately got his book What a Plant Knows. Reading it gives me the intellectual tickles! 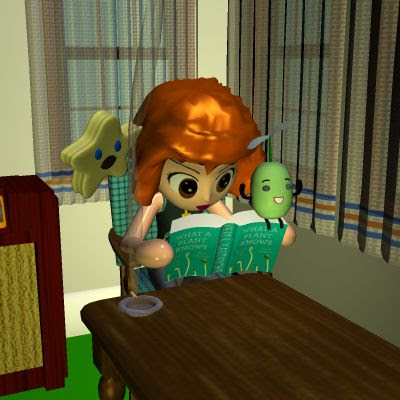 Chamovitz has been opening his mind in the same direction, and the book is a careful exploration of current knowledge about plant 'thinking', never going beyond what has been strictly observed and experimented. Some of this knowledge has been familiar forever to farmers and gardeners, but the internal details have only recently been uncovered.

The plant versions of sight, smell and touch are unfamiliar, and Chamovitz fills in plenty of surprises, such as how plants sense exactly the right colors to distinguish sunrise from sunset, or how one leaf tells another leaf to get ready for an insect attack.

The 'muscles' of alfalfa and clover, which I've been marveling about, are not nearly as amazing as the touch response of mimosa. Plants don't use explicit neurons and muscles; instead they run the same electrochemical processes in more generalized cells.

Chamovitz's 'life-view expansion' goes farther than mine in some ways and not quite as far in others. I suspect the not-so-far parts result from insufficient knowledge.

For instance, his account of proprioception and balance is complete, and his overall life-view is fully expanded in that area. His analysis of hearing (which involves some of the same organs) is incomplete, and he's unwilling to extend the analogy there.

Plant proprioception is familiar: seeds obviously know how to send roots downward and shoots upward. Anyone who has thought even briefly about plants has realized there must be a mechanism... but how does it work?

How do these specific groups of plant cells in the root tip and in the endodermis sense gravity? The first answers came from microscopic studies of the root cap... Cells in the central area of the root cap contain dense ball-like structures called statoliths, which -- similar to the otoliths in our ears -- are heavier than other parts of the cell and fall to the bottom side of the cells.

In discussing the human version of hearing Chamovitz makes one important mistake, which may lead him to underestimate the potential of plants. He says:

The hair cells in our ears convey two types of information: volume and pitch. Volume is determined by ... the amplitude of the sound waves reaching our ears. The higher the amplitude, the more the stereocilia [on the hair cells] bend. Pitch, on the other hand, is a function of frequency. The faster the frequency of the incoming wave, the faster the stereocilia bend back and forth.

Nope, that theory was rejected 60 years ago ... along with a directly parallel bad theory about speech.

What really happens in the cochlea is much more astonishing.

Here's the outer and middle ear responding to an incoming sound wave. The changes in air pressure cause the eardrum to move in and out (in real life MUCH smaller moves than shown here!) and the moves are transferred through the three tiny bones into the snail-shaped cochlea.

Here we have a schematic version of what happens inside the cochlea. The stapes (stirrup) moves in and out, causing a pressure wave in a fairly dense and viscous fluid. The hair cells are between the upper and lower parts, with their sensitive ends effectively reading the width of the upper part.

The wave goes around the bend, then bounces off the 'back end' of the chamber. Interference between the forward and reflected waves results in a standing wave in the upper part of the chamber, pushing against the hairs.


Here's the same schematic with a higher frequency. Note that the standing wave moves closer to the stirrup when the pitch is higher. A different set of hair cells are now being pushed by the upper part of the cochlea. Thus we sense frequency by determining which part of the cochlea is moving, not by counting the actual moves.


Could a plant also use a 'place response' to detect an interesting sound? The mechanism could involve the same statoliths that sense orientation. A low rumble in the earth might be interesting to a plant because it indicates gophers or water-table movements. The low-frequency wave would move the roots slightly; the statoliths would tend to hold still by inertia, and their relative movement within the cell could be sensed. Roots of different diameters would tend to resonate at different frequencies. An earlier thought on plant hearing.

At the end Chamovitz pulls it together in an epilogue, with a summary of the analogies and a caution against too much anthropomorphizing.

The construct of a brainless plant is important. If we keep in mind that a plant doesn't have a brain, it follows that any anthropomorphic description is at its base severely limited. While we can use the same terms -- "see", "smell", "feel" -- we also know that the overall sensual experience is qualitatively different for plants and people.

Hmm. Not sure about that. Seems to me that Chamovitz is actually doing the anthropomorphizing here, in assuming that a centralized brain must exist in order to have things like awareness, attention, and suffering. Those phenomena can't be externally observed. We may be able to identify specific centers in our brains that correlate with those emotions, but that doesn't tell us anything about the internals of other critters. (The fact that our moods are partly controlled by the bacteria in our colon should inspire humility!) We assume, probably accurately, that our fellow social mammals share most of those qualities because we can translate their external signs and cues pretty well. But that's just an assumption, and there's no objective reason to declare that those qualities are absent because the external cues are absent, nor because our peculiar form of centralized neural structure is absent.