Thursday, June 21, 2012
Do plants make their own world? Last year when I replanted the whole back yard after getting rid of trees, I noticed something odd at ground level. After each watering, the places where clover and grass were growing would remain wet constantly, while the places where nothing had sprouted yet would dry out between sprinklings. I thought it was most likely because of shade, but speculated that it could be a direct result of the plants in some undefined way.

Yesterday I did a tiny bit of 'regrading', shoveling some dirt from a high spot into a nearby low spot because I was tired of twisting my ankle when I stepped in the low spot. The whole 'regraded' area is just a couple of square feet, and it appeared level and dry after the shoveling. No plants were coming through, and all the dirt was equally gray.

This morning, about 18 hours later, I looked at the spot. The clover that was under a couple inches of dirt is already starting to poke through, which isn't the interesting part. 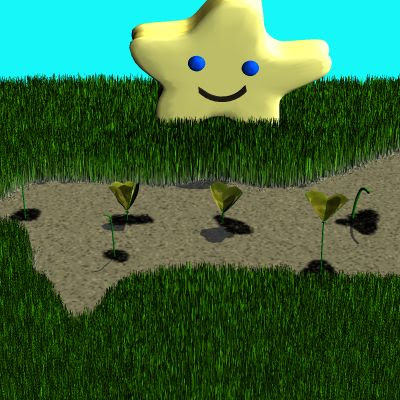 What's interesting is that each stem is bringing its own water along. A one-inch radius around each stem is wet, the rest of the disturbed soil is dry.

Can't be a shade effect. The stems aren't large enough to cast a one-inch shadow.

How does it work? I don't know, but it's wonderful!