Tuesday, April 24, 2012
Sure enough. The neighbor to the north seems to love wind as much as I hate it. Every window and door on her house has two or three hanging wind-chimes. (13 separate chimes on the side facing me!) Whenever the wind reaches 20 MPH, a discordant clangor fills the area.

Last week she installed a purely ornamental windmill, about 10 feet high and made of metal and plastic. My first thought was "That ain't gonna last."

Sure enough. This morning a sudden gustfront came through: 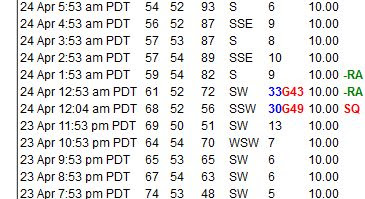 and in the middle of it, above the chimes, I heard a big CREAK! CLANK!

The silly decoration is down. Doesn't appear to have hit anything.... I was sort of hoping it would pull down a few of the chimes when it dropped.

Later: She put it back up, but several of its fan blades are bent. It'll be interesting to watch the dumb thing deteriorate one fall at a time. (A symbolic echo of big-time wind "power" disintegrating!)  ¶ 6:22 AM