Friday, April 06, 2012
Drought? No, incompetence. 1 England is rationing water because of a "drought". Really? Drought? Let's take a look.

England is about the same area as Iowa, so the two should be comparable in terms of ability to store water, places available for reservoirs, etc.

Here's a century of rainfall for England, from this Met Office page. 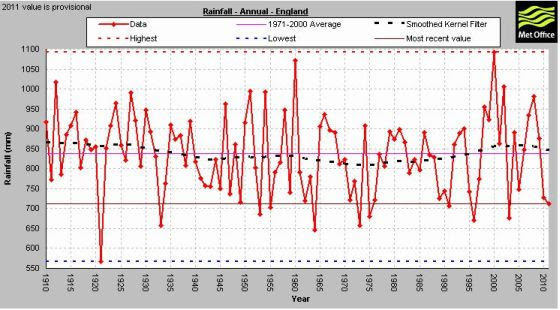 Now here's a century of rainfall for Iowa, from this NCDC page. 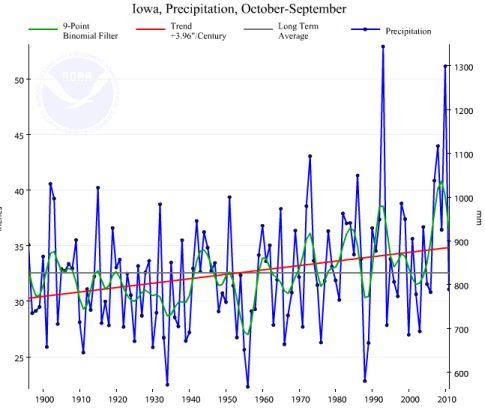 Superimposing England (faint pink) on Iowa (dark blue) you can see that the overall range is very similar. In the last 20 years Iowa has a couple of wet peaks that go well beyond anything England ever gets, but the dry years appear to be the same range and the same quantity. 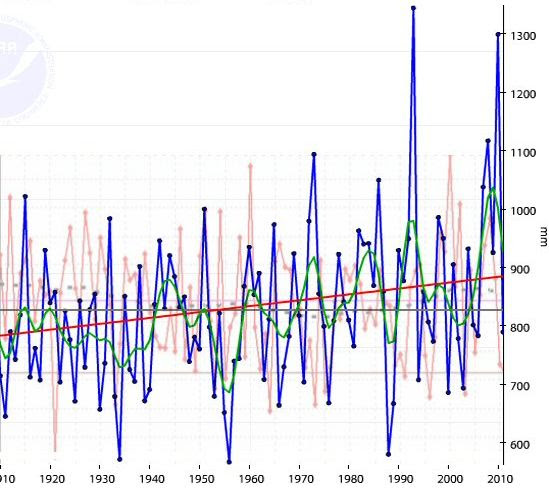 Supposedly the last two years are the "severe drought". England received about 700 mm in each of those years, which is about 27 inches in real units. In ANY American state, even the wet Eastern ones, you'd be slapped silly for calling 27 fucking inches a drought!

If 27 inches counted as a drought, then Iowa should have been in "severe drought" several times recently. Has it?

Iowa is long overdue for a major drought, and there are signs it could happen this year.

Elwynn Taylor, an Iowa State University Extension climatologist, said the state averages an extended dry spell every 19 years. Tree rings from the past eight centuries prove it, he said.

Admittedly England has lots more people than Iowa, but England also has one huge advantage over Iowa. England has oceans. A few miles from London, essentially infinite supplies of salt water, just waiting to be desalinated.

Not a drought. Just a complete lack of engineering, plus privatized water systems. America escaped that particular disaster; for some reason we left water systems under municipal control, where they are still competent.