Tuesday, January 24, 2012
The crystallizing force isn't the Web. It's commonly believed that the Web rigidifies your pre-formed beliefs; that the Web drives you to read only the things you already believe.

This is definitely plausible, but after a sort of off/on/off experiment, I can disprove it from my own experience. Obviously this may not apply to anyone else!

The real source of the rigidity is TV, not the Web.

Separating these influences is difficult. Since 1990 all media have been structured in a bipolar way, with Team A and Team B in every subject from sex to technology to politics.

The off/on/off experiment was accidental. From 1970 to 1990 I watched very little TV. From 1990 to 2000 I had a TV but no Cable; watched only stupid stuff like Springer and Cops. None of the propaganda-carrying stuff like comedies or "news". From 2000 to 2009 I had Cable and watched it ALL THE TIME. Even when I wasn't paying attention with my eyes, the TV was still rumbling in the background. Got firmly attached to the Fox side. Then I basically stopped watching in 2008, cut the Cable in 2009, gradually tapered to near zero TV.

Keeping a blog has forced me to organize my thoughts, and also makes it possible to look back and spot changes. And that's where the End Of Cable shows up clearly. From the blog's start in 2005 to late 2008, I was firmly with Fox, firmly with the neocons, despite constant doubts about Rezident Bush's intentions.

Here's the important distinction between Web and Broadcast media:

Viewpoints outside the two teams are available on the Web, because the team effect is localized on the Web. Each forum or subject has its own two teams. A view that falls entirely outside the R/D split may be Team A on some obscure forum.

During the decade when TV had me phase-locked, I followed the Fox team and ignored the out-of-bounds viewpoints on the web. After the TV lock was removed, I was able to think openly about FDR and Henry Ford, able to absorb non-Fox and non-CNN opinions and information about Israel and Islam and Wall Street. (On those three topics the TV rigidity is irresistible because R and D totally agree: Israel is Our Savior, Islam is Satan Incarnate, Wall Street is God Almighty.) 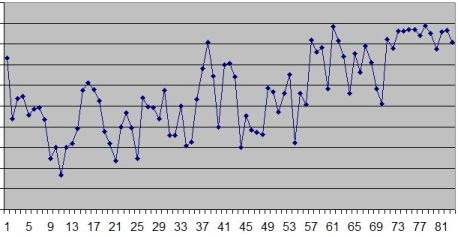 Looks like I started strong then almost ran out of things to say in the first year. The middle part is random as you'd expect from an activity that varies with moods and events. The last 12 months, corresponding to the time when I've been fully 'unlocked' from TV, are unusually constant. Looks like I'm bumping into an unseen saturation point or maximum. I'm certainly not trying to maintain a steady monthly word-quota!  ¶ 3:48 AM