I really wanted this thing to work, but it doesn't. It cooled well on one day when humidity was 20%, but it doesn't cool when humidity is 40%. I've got some serious programming work to do this summer, and I can't afford to be slimy and uncomfortable all the time for the sake of a principle. So I broke down and ordered a regular made-in-China Freon cooler today.

If you want, you can read the part below as a nice bit of wishful thinking. It would be wonderful if an American-made device would work, but this one simply doesn't. American manufacturers have lost it.


Last October, while pulling the Chinese Crap air conditioner out of the window to close up the house for winter, I dropped it on the ground. No injury, because I learned young and learned well an old survival tip from Popular Mechanix mag:

When something starts to drop, DON'T CATCH IT! Pull your hands away instantly!

Nevertheless, the Chinese Crap AC was kaput. This offered me a chance to indulge a couple of my current passions: Bring back American industry, and bring back old technology.

Found dual indulgence in the form of a new made-in-USA portable swamp cooler by Kuulaire in Texas. 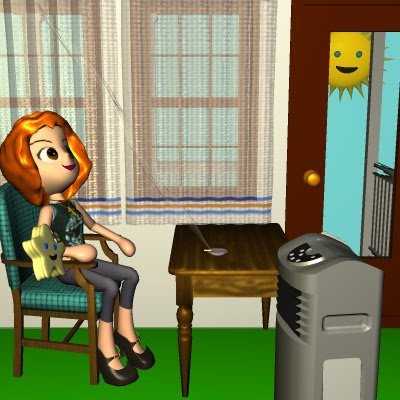 Evaporative coolers are unquestionably old tech, as old as sweat. They work well in places like Spokane where summer is hot and dry. They don't work in humid places like Ohio or Alabama. You need Freon there.

This cooler follows the pattern of the 'perfected' 1930s swamp cooler, with a large surface area kept damp by a pump, plus large air flow. You can't make a useful swamp cooler with casual tricks like a wet towel on a fan; the towel has to be rewetted often and it restricts flow.

Kuulaire seems to be treating these portable units as a sideline, without much marketing. The serial number on this one is 767, which indicates they're a bit beyond hand-made but nowhere near serious mass production.

Their advertising focuses on energy-saving, but only in a standard Green context. Seems to me they're missing a unique appeal to non-Green conservationists and simple-lifers. Non-Greenies know that carbon has nothing to do with warming, and we also know that urban heating is a real human effect on overall climate. A big part of the urban heat island comes from the compressors of conventional Freon ACs. When a Freon AC takes heat from the interior, it dumps the heat (plus a little extra) outside. This makes the city hotter, which in turn makes more people use air conditioning. Real positive feedback, unlike the mythical positive feedbacks imagined by the Carbon Cultists!

Swamp coolers don't cause this form of external 'pollution'. They absorb the heat by evaporating water, and no heat is dumped outside. Thus they ameliorate the real global warming.

Ergonomically this unit is satisfying, with one odd exception. It's clear that the engineers tested the design with real Murphy-quality people; they didn't design purely for fast robotic production as the engineers of Chinese Crap appliances do.

The case is a bit bigger than you'd expect, but (without water) it's very light and easy to roll around. Recessed handles on the sides are just right for lifting, and the 5 casters are placed to make tipover nearly impossible.

Buttons on top control the main functions. Most appliances have a flat membrane panel with vague action, requiring a fingernail to punch the correct area, which then becomes permanently dented. These buttons are mounted on a membrane, but they protrude from the surface, have readable labels, and click satisfyingly. Each button toggles between several conditions (low-medium-high, continuous-random-sleep, on-off) and the conditions are indicated by labeled LEDs with an effect something like an old rotary switch. Nice and clear. (Though ideally I still prefer actual rotary switches.)

The only oddity is the water fill inlet. Behind the buttons on top is a big door with spring detent. When opened, it reveals a chamber or well with holes at the bottom, a lot like opening up a coffee-maker. 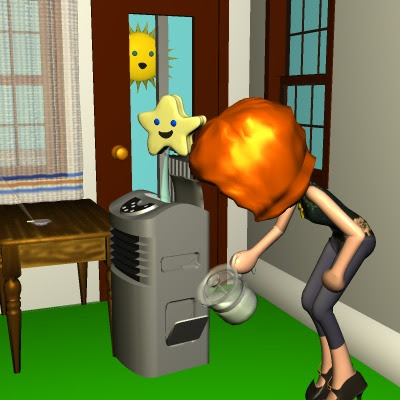 This must be where you put the water, right? Happystar thinks so, but he's wrong. This top chamber contains only the temperature control knob. You put the water in a smaller door on the side. I suspect the original design was supposed to be top-fill; they ordered a batch of cases with the top-fill chamber, then decided at the last minute that side-fill was better.

In operation it's relatively quiet, given the large airflow. The worst noise from a Freon AC is the compressor starting and stopping, which often sounds like a small earthquake. That noise can't happen on a swamper.

Well, does it work? It does produce cool air, but I can't tell if this will effectively cool the house because Spokane is still stuck between winter and spring. Almost June and we still have frost on roofs most mornings. Only two days have busted 70 degrees so far. Might hit 70 next Saturday. I'll update with a performance report if we ever get warm enough to need a cooler!

6/4 update: First warm day, and it does cool the house! Also, the mysterious well on top has a real purpose after all. The pump sends the water up through the shaft of the control valve; water then sprays into the well and drips down the holes into the evaporative medium. In other words, it does work like a coffeemaker (and even has a nice little percolating sound when running!) but it doesn't fill like a coffeemaker.  ¶ 12:25 PM