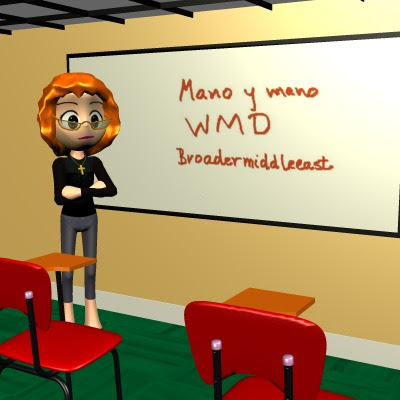 After a long dry spell, partly filled in by unearthing some rare old specimens, Professor Polistra has finally gathered enough new annoyances for a short blackboard.

instead of mano a mano. No reason for this except illiteracy.

instead of iodide. Even the supposed experts are saying it this way. Professor P is slightly puzzled by this. Iodine is no longer** a common household item, so it shouldn't be an attractor for pronunciation. The chemical pattern of 'something something-ide' is quite common, so it should be the attractor.

This is a standard syntactic practice in most Slavic languages. It has always been an occasional rhetorical device in English, now seems to be spreading like wildfire with the same rhythm and feel as the Russian tendency.

Obviously not new, but Prof P hasn't written about it before.

This phrase is clumsy and intentionally deceptive.

Supposedly it refers to nuclear, chemical, and biological weapons. Well, nuclear fits the definition. A thermonuclear bomb destroys lots of buildings and kills lots of people. But chem and bio do not fit the label at all. The original purpose and point of chemical weapons was to kill an invading army without destroying your own industries and farms. Same with bio. Designed to kill and terrorize people, leave property alone. No destruction at all by definition. On the other side, WMD doesn't say anything unique about nuke, chem, bio. You can get plenty of destruction and death with 'conventional' explosives, and the biggest mass destruction in WW2 was caused by plain old fire. So WMD describes only one of the categories it supposedly contains, and also describes several weapons that are not within its supposed categories. In short, it's utterly useless as a description.

Its sole intent is to spread our irrational horror of everything nuclear onto an indefinite range of other weapons possessed by somebody we want to invade.

In short, the phrase is a terror weapon applied to our own population by our own government.

In commerce, 'productivity' means replacing American workers by foreign slaves. In politics, 'productive' means treasonous. Example: NPR feature on Muslims in Long Island. A local mosque is disturbed because Rep Peter King, who had been a friend of theirs before 9/11, has learned something from 9/11. The feature concludes by saying "It is hoped that the next set of hearings will be more productive." In other words, the next set of hearings must bring us closer to surrender, must silence Americans once and for all.

This was one of Sultan Bush's favorite words, and now it's back. Sultan Bush used this mashed-together word to conflate and mash together all sorts of stuff that was happening in that part of the world, to justify attacking countries that hadn't attacked us. The Broadermiddleeast has returned, especially in Hillary's speeches, with the same purpose. Jumble together everything that's happening from Tunisia to Libya to Egypt to Bahrain, in order to justify attacking a country that hasn't attacked us.

** Footnote on iodine: I looked around to see if it was banned by FDA or EPA. Found that it's actually still available, but in the process I learned something useful. Iodine has become rare because doctors realized that harsh antibacterial agents like iodine, mercurochrome, and hydrogen peroxide are really worse for common cuts and scratches than simple soap and water! These hard chemicals do kill bacteria, but they also kill skin cells and impede healing. I've always used hydrogen peroxide for those purposes; guess I should stop. Or else start calling it hydrogen peroxine to be more modern.