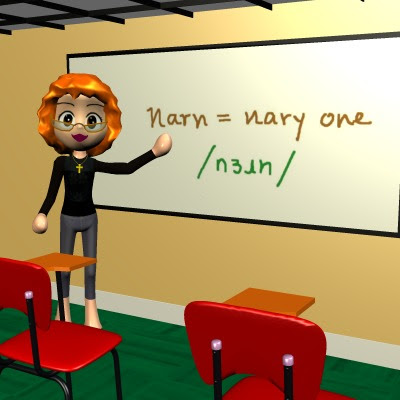 It was heard in this news clip from WXII TV in Greensboro, NC. The clip is about a new factory opening in Yadkin County, with 500 new jobs building plastic pieces for car bodies. Good for that area, especially good for men.

Three different dialects are heard in this short clip. A black female newscaster who speaks perfect Standard Broadcast English; a Chamber of Commerce type who speaks with a local sound but educated vocabulary; and an old white guy named Dwight Palmer who speaks pure old Appalachian. Mr Palmer was relieved to hear about the new factory:

"I got a grandson been lookin for jobs for two month. He ain't found narn yet."

Narn. Never heard that before. From the context it must mean 'nary one', and an online reference (an unanswered question in a linguistics forum) seems to verify the guess:

This week I came across a usage that I've heard all my life, but I've
never had to spell before. I'm assuming it's a contraction of the longer
form "nary a one," and it's pronounced /nErn/ (well, actually there's a
retroflex schwa in there after that front mid lax vowel, not an /r/, but I
don't have an IPA font on this.) Sample usage:

"I had been to Camp Shelby and tried to get a job and I didn't get nar'n."

The most common way I remember hearing this growing up is: "tweren't nar'n."

Another person told me that he had always heard it "nar'n a one."

Prof P hears (or Mr Palmer pronounces) a slightly different vowel than this Mississippi-based description, but it's got to be the same old word, still holding on despite all modern encroachments.

Start from "nar'n a one". Expand it to "nary a one a one." The one in nar'n has been lost from view, requiring replacement by an explicit one.

Nary most likely comes from 'not any', later condensed to nany, followed by dissimilation of the two n's. [Possibly didn't require condensation; at one time the simple prefix n- was enough to create negation, as in willy nilly.]

So "nar'n a one" expands fully to "Not one-ish a one a one", with each one successively condensed and requiring replacement by a new and explicit one.