Basic theme: Psychiatry has become a wholly-owned subsidiary of the drug companies, serving only to sell drugs. This development was not natural or accidental.

Whitaker details the history of the conspiracy, beginning in 1975 (hmm, why does that year sound familiar?). At that point psychiatry was in a crisis, because internal whistle-blowers like Hans Eysenck and Thomas Szasz had publicly and scientifically revealed that the profession was doing absolutely no good. Other therapy systems had grown up in the '70s, some effective and some not, but all functioning without the need of an MD degree. The prosperous priesthood was in danger. Something had to be done.

Their solution was to propagate the theory of "chemical imbalance", which was unproved at the time and still unproved. (Hmm, why does this sound familiar?)

The APA insured that no competing theory could gain credence by de-funding and de-certifying and beating heretics. (Hmm, why etc.)

At this point the shrinks got lucky. L Ron Hubbard's cult of Scientology came along at just the right time; Scientology is weird and fanatical and litigious, but it happens to be correct in its harsh criticism of psychiatric methods. An ideal foil for the APA. (No Hmm here. Though the Warmists use the same techniques to discredit their enemies, they've never been lucky enough to find or create a powerful-and-kooky enemy.)

And the APA then locked its theory into place by addiction. (Not available to the Gaians at all, for which I'm thankful.)

Whitaker shows how it works: 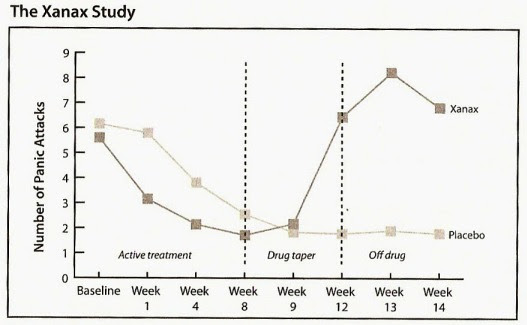 This is a clinical trial of Xanax vs placebo for panic episodes, both accompanied by some real (ie talking) therapy. Unsurprisingly, talk therapy helps with or without the drug. Note that talk+Xanax is only marginally better than talk+placebo. The important difference comes after the pills stop. The talk+Xanax patients immediately get worse than they were at the start, while the talk+placebo patients remain calmer than before. For them, the talk therapy was a real cure.

Here's Whitaker's main point: This curve is typical of all modern psychoactive drugs, and it's the key to modern psychiatry. If you can improve patients permanently by a few weeks of talking, you make a little money and then lose control. But if cessation of therapy makes your patients dramatically worse, you make money for a lifetime and you have permanent control.

Net result of all this: An epidemic of "disorders" which always get worse.

David Healy is a prof of psychiatry in North Wales. ... He compared outcomes of the mentally ill in North Wales a century ago with outcomes today. The population of the region hasn't changed in this period [so numerical comparisons are valid.] The common belief, Healy notes, is that the old asylums were bulging with lunatics. Yet from 1894 to 1896, there were only 45 people per year admitted to the North Wales Asylum. Furthermore, as long as the patients didn't succumb to TB or some other physical disease, they regularly got better over the course of three months to a year and went home. In addition, the overwhelming majority of patients admitted for a first episode were discharged as "recovered" and never again re-hospitalized.

Today, the assumption is that patients fare much better than they used to, thanks to psychiatric medications. However, in 1996 there were 522 people admitted to the psych ward at the District General Hospital - nearly twelve times the number admitted to the Denbigh asylum a century earlier. Seventy-six percent of the 522 had been there before, part of a large group of "recyclers". Though patients spent a shorter time on each visit than in 1896, only 36 percent were discharged as recovered. Patients today are clearly more chronically ill than a century ago, with modern treatments setting up a "revolving door".

Whitaker sums up in the last chapter:

For the last 25 years the psych establishment has told us a false story. It told us that schizophrenia, depression and bipolar illness are known to be brain diseases, even though it can't direct us to any scientific studies that document this claim. It told us that psychiatric medications fix chemical imbalances in the brain, even though decades of research failed to find this true. It told us that Prozac and the other 2nd-generation psychotropics are safer and better than the 1st-generation drugs, even though the clinical studies had shown no such thing. Most important of all, the psychiatric establishment failed to tell us that the drugs worsen long-term outcomes.

One point Whitaker doesn't pound heavily enough: Most of this legalized and deadly addiction is directly or indirectly paid by tax dollars. Whether within asylums or paid by SSI or Medicaid, most of the people who are enslaved by the shrinks and the drug companies are not paying for their own services. We're spending hundreds of billions to fight unprescribed drug traffic at the same time we're spending hundreds of billions to create prescribed drug traffic. Loony.  ¶ 6:45 AM