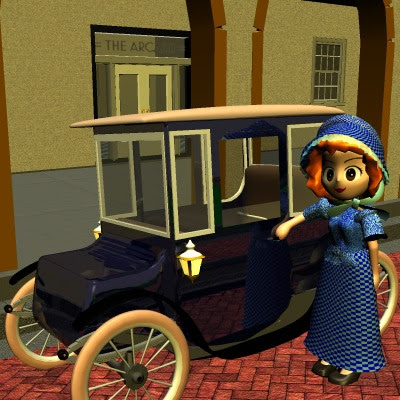 The real Detroit Electric was made in Detroit from 1907 to 1929. America's taste for electrics faded through the '20s as gas cars became easier to start and easier to drive. After the Crash, Detroit Electric dissolved, but the factory came back to life as a boutique operation, modifying a small number of Dodge sedans each year until 1940. It's not known for sure who was buying these cars, but older ladies who had begun driving with the silence and simplicity of electricity probably found it hard to give up the habit. (A 1940 episode of Fibber McGee has the local dowager, Abigail Uppington, gliding along the street in her "portable showcase". Here's the one-minute segment, including the sound of the car. If a phenomenon was featured on Fibber's show, you can be sure it was nationally familiar.)

Now a new Detroit Electric Company has taken the old name and logo to attempt a second resurrection. Appropriately, the new version picks up where the original left off in 1940, with a retrofitted gas car. But inappropriately, the new company has no connection with Detroit or even America. The corporation is British, the body is Malaysian, and the drivetrain is a Dutch design to be made in China. Despite that, it sounds like an appealing car at a good price.

Tech note 1: Strictly speaking, Polistra's car is a cross between a Rauch & Lang and a Detroit. The difference isn't huge; most electrics had the same snub-nosed look.

Polistra's car is now available for free here for you CG types.

Tech note 2: The advantages and disadvantages of electric vs gas haven't changed much in a hundred years.

Disadvantage: just one. And it's not the limited range as such; with enough batteries an electric could go the same distance between "fillups" as a typical gas car. No, the real problem is that the "fillup" takes many hours for an electric and a few minutes for a liquid-fueled car. That's the deal-killer for most Americans. If you drive around town in a fairly predictable routine, an electric would serve you well. But if you want to take a 500-mile trip on a weekend, or you need the car at any time of day or night, then liquid fuel is your only choice.  ¶ 8:03 PM