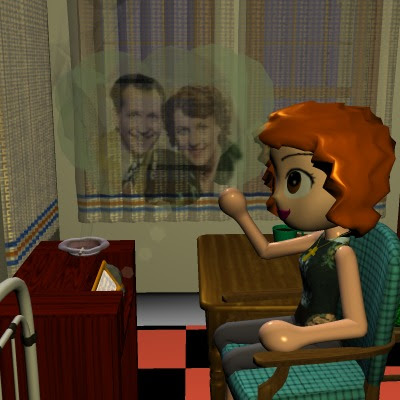 The radio comedy shows of the '30s and '40s generally avoided obvious preaching, except during the war when they were required to carry weekly reminders from the Office of War Information. The point of comedy, after all, is to give the audience a break from the constraints of real life. But occasionally a moral message would slip in ... maybe it came from the writers, maybe from the star. One such message popped up in a 1940 episode of Fibber and Molly.

Here's a one-minute snippet including the message.

Molly: Couldn't you get City Hall [on the phone?]

Fibber: Nope, Myrt says them politicians down at City Hall are so rushed now that you can't get a call through.

Molly: Well, why are they so rushed?

Fibber: Oh, you know. Izzy gonna run for a third term? Izzy gonna announce it soon? Izzy playing possum? [Note: referring to FDR, who was being coy about his intentions to run again in '40.]

Molly: I see. By the way, is there any law against a third term?

Fibber: You know what that means. A tradition is an unwritten law that nobody dares to bust. On account of if they do, it'll be made into a written law, and then somebody's liable to repeal it. And then the fat's in the fire. But you can't repeal a tradition! ... Say, that ain't bad. Remind me to write that down.

Molly: It is written down.

Fibber: Where'd I write it?

Molly: You didn't write it, you read it.

Seems to me that Fibber (Jim Jordan) had a personal stake in this little sermon, even though he tossed it off as just a piece of the script. Was this meant as a caution to his son? To a friend? We'll never know.

Is the message still true? No, it's obsolete. The first part (don't break traditions) is still valid advice for sane people in a sane society, but since 1968 our Leninist masters have trained us that breaking traditions (Questioning Authority, Speaking Truth To Power) is the most heroic way to proceed.

Wellllll, only if you know which traditions to break. Any tradition that advances Christianity, assists marriage, increases civilization, helps real science or real logic: Break'em now! Rip'em to shreds! Any tradition that belongs to Mohammed, Feminism, Gaian pseudoscience: Enforce them with Glorious Proletarian Vigor. Crush anyone who twitches an eyebrow in the wrong direction when Mohammed, Feminism, and The Planet are being "debated".

How about the rest of Fibber's Rule? The middle part still holds. A broken tradition will be replaced by a law, and the law will be enforced by the police instead of by social pressure. In fact, this is the entire justification for the Leninist requirement to break traditions. The Party is universal, and no authority outside the Party may exist.

But the last clause is false, because WE NO LONGER REPEAL LAWS. Anything that gets written into Federal law remains forever. We may cease to enforce it broadly, but the Feds will still use it when they need an excuse to kill a Christian.

In short, Fibber's Rule has been inverted. The nearest we can get in Newspeak is something like this: "Repeal all Christian traditions. Abolish social pressure toward civilized behavior. People will then run wild, which will require new laws, far more rigid and intolerant than the original traditions. These laws shall be eternal."