Thursday, December 25, 2008
Smart business A Spokane metal fabricating company was laying off workers, planning to close by the end of the year, when a single smart idea saved it. Tipke's Manufacturing started making roof rakes, a simple gadget that's easy to build from aluminum tubes and sheet stock. And there's an unquestionable demand: we have 36 inches of snow accum, and some flat roofs are already collapsing. Tipke will start selling the rakes directly on Friday, and I'll bet this will keep them going. 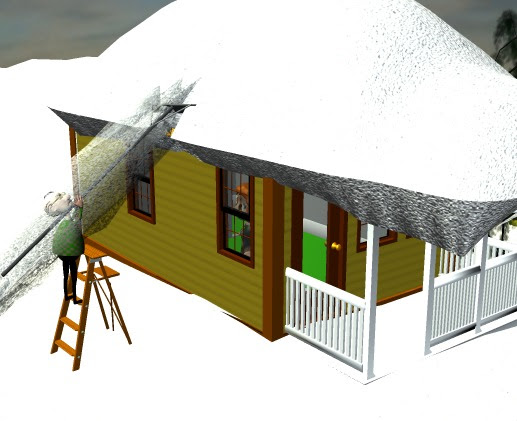 I bought a roof rake several years ago (obviously not from Tipke) and it comes in mighty handy down here, bub. Not a lot of fun, but safer than standing on the roof with a shovel.

Update: Tipke sold out their first production run almost immediately on Friday, and they're building another batch. It's nice to see a small manufacturing business showing real innovation and adaptability. This is, of course, the standard American myth, but it doesn't happen often now. Service businesses can still be innovative, but unfair competition from China (along with litigation, regulation, and the WalMart monopoly) makes it much harder for a producer to survive let alone innovate.

Speaking of service, it occurs to me that a septic tank company could make money by literally sucking snow off roofs. Their hose and pump are built to handle sludge, which has about the same consistency as snow. They could use a pole to manipulate the end of the hose, and keep the tank warm so the snow would quickly melt into a reasonable volume of water.  ¶ 10:51 AM