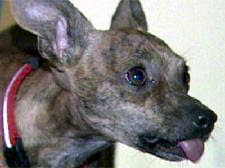 Nice local story about a crime-fighting chihuahua. The cops were chasing a fugitive when he disappeared somewhere in a trailer park. They looked around but couldn't detect where he might have gone. A nearby resident saw the action and brought out his chihuahua (rather unimaginatively named "Taco"). The dog immediately sensed the presence of a hostile stranger in one of the vacant trailers and pointed to a window. Sure enough, the fugitive was behind that window. Hearing the commotion, he bolted out of the trailer and the cops caught him.