Saturday, August 16, 2008
Sushi or Smucker's? The character of Fran in Polistra's Dream is trying to make a point, especially in part 6. I think her point needs to be brought out more explicitly, so I'll come at it from a different angle... 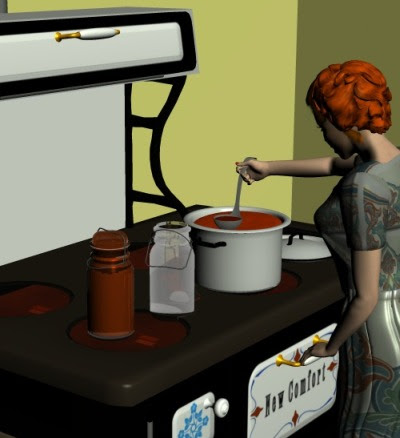 Before television, humanity developed numerous ways to preserve ideas and concepts. The first was oral repetition, which was fragile; it depended on the survival of the troubadors or scholars who held the words. Books were far more permanent. But there are also more subtle and more "jam-like" ways to preserve an idea. I've tried to show some of those in the Dream. Mr Wentz's lamps preserve the spirit of the Osage warrior, even after the Osages were lost to alcohol and welfare; and the lamps add the value of a Deco-era design to frame the Osage shield, making it more digestible to a 1930's audience. The Arcade itself, like many buildings of that period, preserves both the esthetic sense of an earlier race (in this case the Spanish) and the labor and vision of the men who laid the bricks and sculpted the terra-cotta ornaments. The music of Aaron Copland and Scott Joplin preserves the rhythms and melodies of an earlier class or group, baking them into a more formal loaf that can be stored and played by later orchestras.

Like a bottle of beer, these preserves can be opened and consumed; the viewer or listener can derive mental and emotional nutrition from them.

Unlike beer or bread, these preserves can be consumed repeatedly. An Arcade or an Osage lamp can keep you alive, allow you to work and enjoy, while contributing its unique flavor to your life. It shapes your thoughts, injecting just a little bit of the Spanish or Osage flavor into your soul. By contrast, a rudely functional modernist building or lamp adds nothing. It merely surrounds or illuminates.

In a different realm, we have also failed to 'jell' our political and religious ideas.

We have gone in two different directions.

On one side, fundamentalists insist on quoting raw Bible verses or raw sections from the Constitution, or raw bits of totally indigestible philosophers like Kant or von Mises. They seem to derive some pleasure from the act of quoting, but there is no added value, no terra-cotta ornamentation, no brass frame.

The other side is less subtle: Leninists simply smash ideas into fragments, forbidding us to discriminate and judge.

I think the good ideas would stand a better chance of survival with more decoration, more grace notes, more stained glass, more sugar. Their 'container' would then be worth defending and keeping, even by people who don't yet understand the 'contents'.= = = = =Artistic note for Poser types: the stove and other utensils in the picture are part of this set.  ¶ 2:27 PM