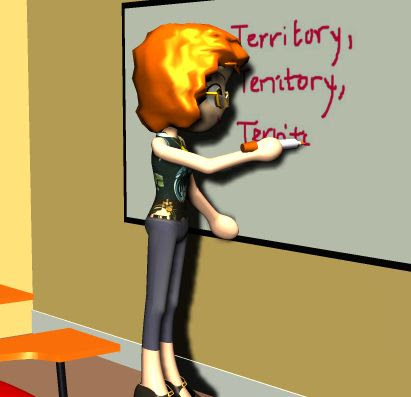 Professor Polistra briefly returns to this decade bearing the gift of clarity.

All of our elites believe --- or claim to believe --- in the image of America as the selfless altruistic bringer of liberty.

Miss Romney is especially annoying in her constant emphasis on this point. "Isn't this country just wonderful as the dickens?", she chirps. "America always fights wars for the freedom of others and never takes anything."

Well, Miss, it's not wonderful. It's suicidal.

And we didn't always do it this way, either.

For the first half of our life as a nation, we fought wars in the normal human way: to gain or regain territory. And when we gained, we used the territory to advantage: mined its resources, farmed its land, built forts to defend it. Wars were fought for a net profit, even if not always calculable in strict monetary terms. The investment in money and blood was meant to be repaid.

Sometimes we were able to buy territory from faded empires, as when we bought the Louisiana Territory from France in 1803, or Alaska from Russia in 1867; but mostly we fought wars to gain or keep.

Lincoln's war was all about regaining the territory of the South, and his successors behaved normally after winning that war. The Union milked the South for everything it could grab. (See 'Carpetbagger'.) In 1940 we still understood the situation accurately, but since then we've rewritten the whole mess as a pure angelic impulse to free the slaves.

Our largest warlike expansion was between 1870 and 1910, when we fought aggressively against Spain to claim the Phillipines and Cuba, and fought Mexico to gain the present Arizona and New Mexico. In that same period we also turned most of Central America into "commercial colonies", essentially plantations managed by the United Fruit Company.

The first exception to the rule was Wilson's entry into WW1. We had no immediate territorial stake, though Germany was trying to muscle in on our Central American quasi-colonies. When WW1 was done, we claimed no spoils. Instead Wilson claimed the right to spread Democracy. The result was WW2, which should have taught us something.

What brought us into WW2 was a threat to our colonies, not a threat to our national homeland. Radio news bulletins on 12/7/41 treated Jap attacks on the Phillipines and Hawaii as parallel, and FDR's 'day of infamy' speech also refers to Manila and Honolulu equally. In our modern non-colonial fantasy, we've rewritten the event as a pure threat on our national territory (because Hawaii became a state 18 years later), and we've forgotten Manila.

Professor Polistra thinks the non-colonial fantasy was imposed on us by the Soviets in a clever bank-shot gambit.

In the '50s, France and Britain were exhausted and devastated from WW2, and couldn't spare the energy and personnel to manage their African and Asian colonies. Russia was even more devastated, but Stalin was more concerned with gaining territory and resources than with rebuilding the homeland. Stalin manipulated our Wilsonian delusion of self-determination to grab much of Africa, Asia, and the Caribbean under the guise of independence from colonial masters.

Because the Wilsonian delusion was ours -- and because much of our bureaucracy was loyal to Russia -- we couldn't and wouldn't deal with Africa honestly. We couldn't speak the plain truth: those African and Caribbean colonies were not qualified for self-rule. We had to support the notion of independence, which meant ceding much of the world to the Soviet Empire. (A few people did speak the truth, but they were ruthlessly condemned and silenced by our Sovietized elite media.)

JFK tried to turn the tide and got himself killed. Reagan tried again, and Russia tried again to kill him, but didn't send a sufficiently competent assassin. When Reagan and the Pope survived their parallel assassins, they worked together to collapse the Soviet Empire. Since the victory happened slightly after Reagan's last term, it's not clear how he would have clinched it, but in any case the presidents since Reagan have returned to serving Lenin, even as the center of the ideology moved from Russia to China.

The current occupant of the Oval Office, Putin's dear soulmate, has followed the Wilson delusion more feverishly than Wilson himself. He spends thousands of lives and trillions of dollars to "bring Democracy" to the Middle East, and in the process he makes resources even harder to reach. He won't even claim our OWN offshore territory for oil extraction; he defines allies as enemies and enemies as allies; he kisses the ring of our Saudi attackers when he should have depopulated their country and claimed its oil as American property.

None of the current candidates will question the Wilsonian delusion; all of them take the bizarre position that Putin's soulmate is fighting this war with maximum strength and loyalty. Some promise to stay on the current path until we are totally bankrupt and exhausted (though they don't say the last part of the sentence) and some promise to surrender quickly and cleanly. Since those are the only available choices, quick and clean surrender is preferable. At least we will know where we stand, and we will not be spending the next 100 years in a long terminal illness.  ¶ 10:36 AM