Wednesday, December 19, 2007
Harris gets it Lee Harris, one of the better commentators, sees the Huckabee phenomenon correctly. It's not really about religion, it's about culture.

I have also been sampling some of the anti-Huckabee literature, which is becoming increasingly shrill and mean-spirited. As I read some of these comments I found something quite strange going on inside of me. I felt offended, in a personal way, as when someone attacks not you, but your family, or your people. In short, I felt angry, righteously angry.

Harris goes on to describe his Baptist upbringing, and the role played by unspoken cultural habits. And then the key:

Much of this attack takes the odious form of snobbery. It is true that the Southern Baptist church has seldom been the home of the elite, social or intellectual. On the contrary, it began as the religion of the poor and the uneducated, those who farmed their own land and made things with their own hands.

Hands. The real difference between those "economic conservatives" who control most of the "conservative" commentary, versus plain old Americans. The "economic conservatives" don't need a country or a place; they can exist on a purely virtual and numerical plane because they have the power to escape to Dubai or Shanghai after they have succeeded in selling off America's physical production capacity. As long as their fraudulent Core Inflation remains low, as long as they have Zip Zero Nada Taxes and Zip Zero Nada Interest Rates, their gambling addiction can run wild, scouring the American landscape of mere physical objects like factories, mines, and oil refineries. Meanwhile, those of us who grew up in a hand-based culture, who come from lines of farmers, mechanics and cooks, are struggling to exist. Huckabee seems to understand this difference, though he hasn't yet offered satisfying specifics. Maybe he will listen to Hunter on this point.

Nobody told the Southern Baptists what they could and couldn't think—not even each other, which is why they kept dividing off into new congregations so frequently. You still can't tell them what to think, which is perhaps why the intellectual elite distrusts them — they stubbornly refuse to take the word of those who are so clearly their cerebral superiors.

I'm not sure about the last point. It's not so much that the elite distrusts us, more that they see us as utterly irrelevant and incapable of thought because we don't have Harvard degrees and we don't share their bizarre addiction to maximal status and power expressed in numerical form and measured by transparently false instruments.

Polistra has felt the same not-quite-logical loyalty to Huckabee, beginning a month ago. Huck strikes a deep chord in a native of the Protestant Midwest. He is the natural chief or delegate of our tribe, the leader of the farmers and mechanics. He insists on judging by merit rather than numbers.

Incidentally, this precise distinction probably accounts for the elite's wild hissing at his Foreign Affairs article: he is judging Persia and Pakistan by their essential human qualities and intentions, not by their weapon stockpiles as measured by transparently fraudulent CIA reports. Similarly with Huckabee's record of pardons and paroles: he trusted his judgment of character more than Due Process or Minimum Sentence Guidelines.

If the "conservative" elite could stop hissing like cats in heat and start thinking, they would realize that judging on merit is supposed to be a basic axiom of conservatism. The old American setup gave room for personal morality on both sides. Public opinion and juries were meant to examine the character and intentions of offenders; and would-be offenders were slowed down by the prospect of facing a public that had no fear of discrimination lawsuits. When the elites squawk about Huckabee's insistence on using his own morality to examine the morality of the criminal, they are following Lenin's road: they are replacing natural judgment by "objective" formulas. It's true that natural judgment makes errors at times, but when you banish morality from your brain and use stiff binary rules instead, you have laid yourself wide open to a complete systematic error.

If you measure your enemy solely by his centrifuge count, the CIA can lead you into truly stupid mistakes. Contrarily, when you use your own mature and practiced moral judgment to measure the enemy's moral nature, you won't be fooled by Joe Wilson's thumb on the scale.

Semi-relevantly, here's my great-great-grandfather, a Baptist preacher and carpenter. He wanted a church to preach in, so he built this one in 1880, and proceeded to build much of the surrounding town. I don't know if the church still stands ... looked solid enough when this photo was taken in 1956. 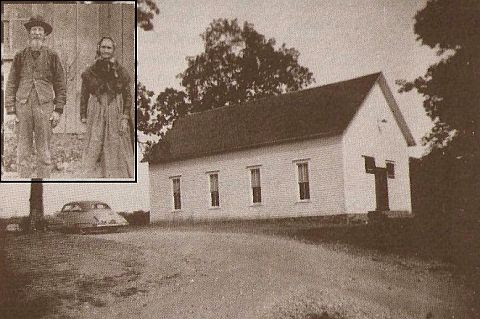 Note the work gloves, even when posing for a rare photograph. Hands.  ¶ 7:16 AM