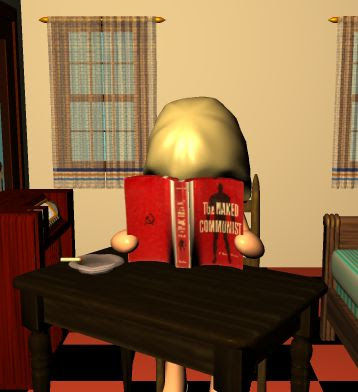 Polistra has been reading W. Cleon Skousen's book The Naked Communist. After finding the astoundingly prophetic 1958 list of Commie goals derived from this book, she was compelled to seek more details. Meanwhile, Glenn Beck has also discovered the book and recommended it to his listeners.

Because of Beck's recommendation, I was afraid all available copies would already be bought ... but in fact I shopped at good old Alibris.com and found a dozen copies in various conditions, which is just what I'd expect for a book of this vintage and type. Perhaps Beck is referring people to the official Skousen site which has some newer publications and CDs; in any case, I wanted an old book so I could be sure of the prophetic quality of the list.

Skousen's book is disappointing on one small point: I really hoped he would amplify the item about artistic ugliness (#22 and #23) in his list of goals. This item explains most of our current culture, but I hadn't realized it was a specific 'bullet-point' on the long-standing Communist agenda. The book contains a version of the list, with extended descriptions of many items, but no extra footnotes or documentation of this goal.

With that quibble out of the way, Naked Communist is quite simply a Bible of politics, history and economics. Skousen always starts from basic human nature rather than a theory or formula, and then proceeds to explain matters clearly and plainly. I've read a lot of political and economic books, but never learned and retained a tenth as much from any of the others.

Example from economics: When laying out the nature and advantages of free-market capitalism, Skousen starts from the needs of humans, not only the crude physical needs but the spiritual needs. He lists:

To be of individual importance so as to count for something as a person.

To be a 'vested party': to be identified with the system.

To be appreciated for some unique and important contribution.

To have a satisfactory degree of economic security.

To feel the satisfaction of sacrificing or risking something to achieve progress.

To have the opportunity for creativity.

To have freedom of expression in matters of opinion.

To be protected in convictions of religion and conscience.

To feel significant in determining matters of political importance.

In studying the nature of man it soon becomes apparent that his "mainspring of action" is the driving necessity to satisfy both physical and spiritual needs. Many economic systems which men have invented tend to smother or ignore these deep, throbbing human desires.

... The genius of capitalism is not merely that it satisfies the desires and needs of mankind generally, but it responds to the factor of variability between individuals. It allows each man to do anything he wishes so long as he can survive at it. Therefore each man continually surveys the field of economic opportunity and gradually tries to push himself into that phase of work which best satisfies him.

This focus on variation, along with its criterion of survival rather than dominance, is absent from modern expositions of capitalism. Current expositors have a strong smell of Ayn Rand about them ... in other words, a strong smell of the schoolyard bully. They assume that everyone must aim for the peak and "get a life"; that everyone must work 600 hours a day, smoke $600 cigars, drive 600-horsepower Maybach limousines, and watch football on 600-foot-tall high-def television sets in their spare time. They assume that the only meaningful destination is unimaginable material riches and absolute control, and that anyone who fails to reach this pinnacle - or anyone who fails to desire this pinnacle - is a Loser Loser Loser Nyah Nyah Nyah.

Skousen emphasizes that capitalism (when properly organized) gives superior benefits to everyone, not just the champions. In fact, that's the point. Natural conquerors don't need civilization. It's the lower echelons, viewed as contemptible by modern commentators, who need capitalism and civil order most desperately.

The most tantalizing bit of the book was a fairly brief mention of 1973 as the goal for complete world Commie takeover. I'd been using 1968 as the turning point; clearly '68 brought a dramatic push in Europe, China, and America. But a lot of important landmarks were achieved between '68 and '73. Consider that Comrade Nixon was elected in '68 and kicked out in '74. During his term, he effectively established the newer form of Leninism in America, the environmental movement; he pulled out of Vietnam, negotiated with the USSR, and established our "alliance" with China. He also built affirmative action into the American legal structure, and Comrade Harry Blackmun [may he roast in Hell], appointed by Comrade Nixon, established abortion as the deepest and most untouchable part of what the Left calls "The Constitution". In other words, Nixon gave us all of the Holy Sacraments of the modern Left by 1973. Nothing new has been added to the Canon since then.  ¶ 8:42 AM