Thursday, June 28, 2007
Integration Headline coverage of the recent Supreme decision on school integration reveals a sometimes hidden truth. The decision is a good one, making it harder to discriminate, yet all the newscasters say the following, nearly verbatim:

"Cities will have to find new ways to achieve diversity in the classroom."

Thus acknowledging, without even needing a pullquote or a fact-check, that the sole purpose of government is to advance Stalinism. No balance needed here; nobody even says a nice polite compromise phrase like "Cities will have to consider the possibility of stopping their official discrimination." That's so laughably absurd that we don't even have to think it.

We're always told that the latest Supreme decision is "The Law Of The Land", but it's obvious that "The Law Of The Land" only holds valid when it agrees with Stalin. On these once-in-a-lifetime occasions when the Supreme Court happens to agree with the Constitution, the decision is immediately declared invalid by the rest of the government, and the proper duty of all officials is to disobey the Court. Anything else is DoubleplusUnthink.

Despite all that, the decision is correct, and does agree with the actual Constitution. Schools should not favor one race over the other.

My point here: it's correct but unhelpful.

And the discussion of the decision on both sides is incorrect and unhelpful, because both sides are talking about the inputs (what we do to the students while they're in school) rather than the outputs (what we expect the students to do when they're finished with school). Both sides assume that the current structure of public schooling, where we trap kids inside a building with "School" on its signboard for 12 years, is God's Law, Eternally Unalterable.

And of course, both sides are jumping around like crack-smoking crickets to avoid the most important fact, which is that Blacks, Whites, and Orientals are different. People from Africa have stronger muscles and weaker minds; Orientals have stronger minds and weaker muscles; and the average Caucasian is in the middle on both scales.

If we're going to get this right ... if we want genuine equal opportunity in life, not just in the 12 years of captivity ... we have to start with the facts, and we have to decide what output is really needed, decide whether and why we need anything resembling public education. When we see these accurately, we then have to reshape a few other things along with public education to get the needed result.

How do we measure or quantify the desired output from schools? It can't be a certain number of grades completed, because that number means something different for blacks and whites. It can't be a test score, because blacks will perform poorly on a test. All of our attempts to match the races on these measures have failed and will always fail.

Peel the onion down by layers. First we have to ask: Equal opportunity for what? The Declaration gives us the deepest answer: life, liberty and the pursuit of happiness. We have somehow translated this to mean "Equal opportunity to receive a piece of paper called a Diploma from Harvard." All of our legal decisions are based on this bizarre re-interpretation. Every decision along the way must be focused on a Diploma From Harvard. Perhaps such a Diploma is an ingredient of the pursuit of happiness if you're going to be a federal judge; perhaps these sheltered people can only see into their own past. But the pursuit of happiness means something very different for nearly all ordinary Americans, and specifically for males with low academic potential. It means being able to raise a family. Able to provide a home, cherish and protect a wife and kids. That's what it means, and that's the output we need to be watching as we redefine the government contribution toward that end.

Peel one more layer. What's the minimum expectation of any public tax-funded utility? Though the Constitution doesn't go into detail here, I'd say public utilities provide the basic means for a safe and dignified life. They provide the bare underpinnings for civilization, but not much more. We don't expect a water system to include coffee, tea and Chivas; we don't expect to have a personal policeman constantly at our side. A street system should carry most vehicles without ruining them, but if you want to ride a donkey or run a Maserati at 150 MPH, you have to do it off the streets.

By that standard, how much of the public education system is capable of carrying most vehicles without ruining them?

We know the answer. The first four grades. Reading and writing and nothing more.

If you have a truly special talent or skill, you already know it by that point, and your parents should be able to find a school or situation to develop it. Every biography of a notable politician, pianist or preacher contains the same line with minor variants: "At age 9 I found a way to practice my profession." Sometimes it's through a mentor or apprenticeship, sometimes it's more of a play situation, but the real expert always starts practicing at 9.

By keeping all the kids in school all day after that point, we are only taking away time from such play-practice, for all but the richest. And by keeping those with less specialized skills out of the world of work, we are depriving them of a sense of usefulness and worthiness.

Now, how about the "few other things"?

Look at these pictures. 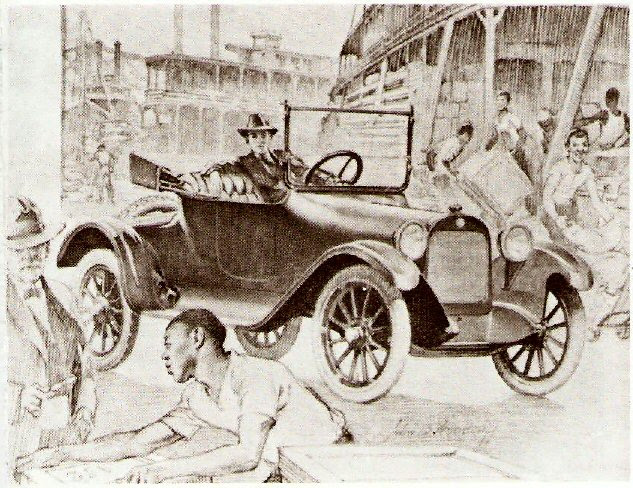 This is a 1919 Dodge ad. If you can suppress your modern conditioned eye-rolling response to the "stereotypes", you might notice something more interesting. Who's got the dignity in this picture? Who has a sense of usefulness and service? And who's lollygagging around doing nothing? 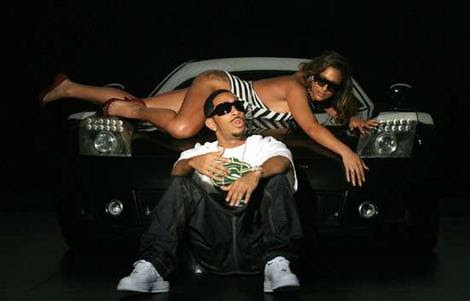 This is a 2007 ad for something or other. I think he's a rapper. Who's got the dignity here? Nobody. Who's doing the service? Maybe the ho. Who's lollygagging around doing nothing? 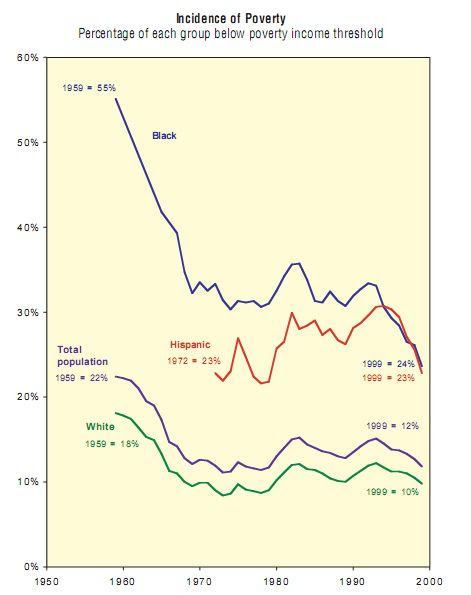 Now this is a graph of black poverty through part of the 20th century. Note the steady decrease, clearly beginning before 1959, and the flatline from about 1970 until the 1996 welfare reform broke the pattern. What caused the steady decline in poverty? Henry Ford and FDR, working in different ways and for different motives, brought blacks off the plantation and into industrial jobs where their particular combination of physical and mental skills was ideally suited and well paid. And what caused the flatline? Two things, again simultaneous but unconnected: the loss of industrial jobs to Japan and China, and LBJ's Marxist/Maoist decision to create a victim class and maximum chaos. We stole both the pay and the respect from the kind of job a black man could do well, and we substituted welfare and Ludacris expectations. He's no longer able to provide for a family, and he's not expected to do anything but commit crimes and look cool.

Moral of the story:

We need to take back our industries from China. Obviously we need to do this for a thousand other reasons, such as national defense, an unpoisoned diet and national survival. But maybe, just maybe, we'll do it a little faster if we realize that a vibrant industrial sector is the best way to restore the dignity and fatherhood of black men. We owe it to them, since LBJ, operating under the theories of Comrade Frances Fox Piven and Comrade Richard Cloward, deliberately stole it from them in 1965.

And as we revive our industries, we can shape the trade schools, both private and public, to meet their needs.

Edit: The economic side of this discussion also applies to white kids with lower academic skills. They are equally damaged by an economy that considers college degrees to be the sole meaningful credential and brings in Mexicans to lower the wages of physical jobs. But the cultural and welfare pressures are exclusively racial, so the problem weighs most heavily on young black men.