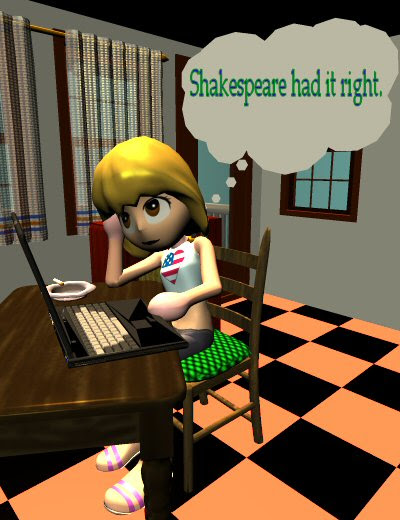 The overly publicized spats involving The Rosie aren't the only current examples of pointless disputes. In the little world of 3D graphics, we've been having some royal dustups lately over copyright and patent questions. Luckily, I'm not directly involved in any of them (though one came uncomfortably close to my specialty) and I'm old enough now to avoid taking sides and doing the "team thing" when it's not objectively necessary. I tried that a couple times when younger, and ended up feeling used and abused. After the dust settled, it turned out that the 'right' and 'wrong' sides weren't nearly as crisp and clear as they had initially appeared.

In each of these current disputes, the aggressor apparently has a history of starting fights, and seems to enjoy the litigation game more than productive work.

We need to redistribute futility. We need to make life more difficult for lawyers and litigators, and easier for plain old producers.

I should add a positive note. A recent Supreme Court decision (KSR International vs Teleflex) has in fact made life harder for patent predators. In the last decade or so, the Patent Office has been granting "killer" patents for software, patents that attempt to cover extremely basic techniques used in almost every program or chip. The Supremes have now ordered the Patent Office to enforce the actual law instead of giving in to the big-money players. Actual patent law is quite rational; has always forbidden patents on general or universal methods, requiring a patented item to be unique and fresh by well-defined standards.

Actual copyright law is not rational. The provision that all works are presumed to be copyrighted at creation, without any need for registration, places nearly everyone in an untenable position. There is no way to know whether you're safe from an attack, because anyone can claim to own anything. On the other side, such claims of previous ownership are hard to maintain even when valid. Net result: real creativity doesn't matter and isn't protected. Expensive lawyers win, regardless of any facts. The solution is perfectly simple. Copyright registration is well-established and is used by all "serious" artists and publishers. All we have to do is eliminate the inherent copyright and require everyone to use the registry. If you don't find it in the registry, you're free to use it. Unfortunately this won't happen, because the big players (chiefly Disney, which wrote the current law through the corrupt services of Mary Bono) won't allow it.  ¶ 7:08 PM