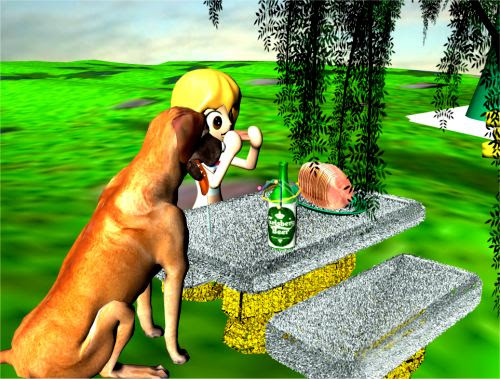 Polistra decided to put together a picnic with some of her favorite Danish things, as a symbolic tribute to those gutsy Danes.

After assembling the stuff, she realized that these comfortable things have something else in common. Ham, beer, and dogs. All are anathema to Mohammedans. No wonder they hate the Danes so much!

Seriously: the dog is the most important factor. Dogs civilize humans. We learn patience, altruism, and loyalty from them. A culture that fiercely prohibits the presence of dogs is a culture that stubbornly refuses to learn anything about civilization.

Not-so-seriously: the model atom didn't just drift down from the reactor to land on the beer. It's there for a reason: Carlsberg Brewing has subsidized Danish science for many decades, including such luminaries as Niels Bohr. So the next time you sip a Carlsberg, appreciate the fact that Carlsberg has done more for science than most governments!  ¶ 12:39 PM