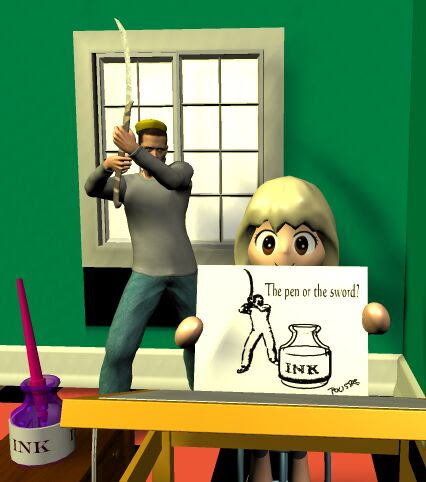 A little editorial in the latest New Scientist contains a reagent-quality sample of moral equivalence at its worst, along with an interesting piece of under-reported good news.

Even as it campaigns against Iran's nuclear programme, the Bush admin seems ready to overturn a 30-year domestic ban on reprocessing spent nuclear fuel. It also wants to reprocess spent fuel from other countries.

That's the good news. A solid indication that we're finally getting serious about nuclear electricity. A sane pacifist would applaud our effort to beat radioactive swords into plowshares, but of course today's pacifists are not sane:

Many fear that this would send the wrong message to countries like Iran and North Korea, and encourage reprocessing in Russia. "This is the worst possible thing to do," says Damon Moglen of the [Soviet front] Union of Concerned Scientists. "It is a classic example of the US telling the world to do as we say, not as we do."

Unfortunately, Kindler Gentler Georgie abets the Equivalentist mindset by focusing on weapons, not on people.

For the thousandth time: Weapons are just tools. When you remove a tool from an evil person or culture, you are only fooling yourself.

An evil person or culture will always find a way to harm others, because that's his reason for living.

The cure for an evil person is either to separate him from society permanently, or to kill him. Since we can't imprison a nation (culture, religion) effectively, the only cure is to eradicate it.

It's really not hard to determine which entities are evil.

The current Inkifada makes a perfect little litmus test: If a nation or religion treats its own people badly, we can try to reform its behavior but we're not entitled to destroy it. If a nation or religion reaches out and kills foreigners or infidels for drawing pictures or writing books, we need to destroy it. Or at least destroy enough of it to dissuade the few survivors from resuming their evil ways.

Churchill and Roosevelt understood this point, repeated it constantly and coherently, and implemented it fully against the Fascists of that era. I see no evidence that Kindler Gentler Georgie understands this point, and our State Department emphatically takes the equivalentist side.  ¶ 11:23 AM