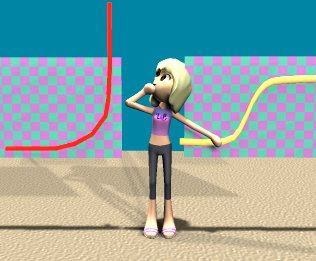 Trying to figure out why the Left loves death. It's not quite that simple, but it comes down to the same thing. Thinking back to my own years on the Left, remembering my response to a birth or a death .... strictly Malthusian. Birth is bad because it means more humans, and more humans will inevitably lead to exponential accumulation. What's missing in this picture (the red graph on the left here) is FEEDBACK. Real systems, especially those involving life, always have some constraining influence, which leads their patterns to look more like the yellow graph on the right.

Rise for a while, until the feedback takes hold, then run steady or even drop. You see this pattern in micro and macro scales. Neurons follow this pattern, and many other processes in the organism do the same. World population is in fact rapidly approaching the 'mesa' of the feedback graph, and most Western countries are dropping. You can see it in economics as well; the Laffer curve is an alternate perspective on the 'mesa' pattern.

Overall, every aspect of Leftist thinking is based on a primitive failure to understand feedback, which is identical to a failure to understand the difference between life and death. Dead things, like rocks, never make choices; they never try to escape from a box. If you want a rock to move, you have to push it; if you want it to stop, you have to put a barrier in front of it. The result is a bulldozer approach to life and economics. Forced integration, price controls, central planning, static prediction: All excellent procedures for a nation of rocks. All stupid and ineffective for a nation of humans. The difference is especially direct in the environmental realm, where the whole theory of 'global warming' relies on a failure to include earth's own feedback mechanisms; and the Endangered Species Act attempts to short-circuit the natural feedback process of selection.

It's no coincidence that the modern intellectual Right arose in Britain in the 1700's. Adam Smith and James Watt are part of the same tradition. Both understood the power of negative feedback. A steam engine works on its own when you add a centrifugal governor; a nation runs smoothly without brutal rulers when you add a parliament and let the free market balance itself out.  ¶ 12:37 PM